This couple have had a long running love affair with Japan, and so it was only natural that they wanted to get married here.  They always knew they wanted to have  Tokyo shrine wedding, but were not sure if they would actually be able to do so, that is, until they found us!  And once they found us in December 2018, they were very quick to decide a date and book and finalize their shrine wedding in Tokyo.

The process was really quite straight forward:

Fast forward to April 2019, we met them in Tokyo for their kimono fitting. We say fitting; in reality it was a kimono choosing, but this just doesn’t have the same ring to it!  Kimonos are in fact a one-size-fits-all garment.  They had been thinking about it so long, that they already knew exactly the type of kimonos they wanted, and so we had more time to sit down with a coffee for a chat.

As with all our clients, it was like meeting old friends!    We drank coffee, ate chocolate cake, admittedly not the best cake, but it was chocolate!  Oh, and we laughed!  We laughed a lot!

The next day, Ayako met them bright and early, in the rain.  It rained all day… In fact, it was the first time it had ever rained on one of our weddings!  Still, the couple didn’t care.  They were in Japan fulfilling a long standing ambition, and a little bit of water from the sky was not going to dampen their spirits!  And anyway, rain brings with it gorgeous lighting for photography, so you weren’t going to hear any complaints from anyone!

Obviously, we had to get creative with posing and positioning for photographs.  We can’t have the kimonos get too wet.  However, our kimono vendor staff were on hand to assist the couple as they made they way too and about the shrine.

At the first-meet, they giggled like school kids, so giddy were they with excitement.  They were living the dream, and they looked amazing!  At one point though, the excitement of the day and the raw emotion did get a bit too much for the groom.  Here he was, standing with the love of his life, both wearing kimonos, about to have shrine wedding in Tokyo, the place they have both come to love and regard as a second home.  The emotion was bound to get to someone at some point.

It was quite a touching moment.

The shrine itself has stood on the grounds for some 800 years, and while the neighborhood has grown and modernized, the shrine retains an otherworldly feel, quite detached from the outside.  And, even though the Seibu Shinjuku train line passes right by the front of the shrine, you are hardly aware of the passing trains from within the grounds of the shrine.

It sits on quite a large plot of land, making it a perfect festival site for events in the community.  It has a Noh Theatre stage – perfect for photographs – and even a mini  rock garden.  The tall evergreen trees that surround the shrine help to separate it from the outside world.  Most photographs taken in the grounds are sure to have some greenery in them.

Before any Shinto wedding there is a rehearsal.  Because the ceremony is very ritualized, the couple need to be clued in about what to expect, and what to do.  The staff at the shrine are awesome people and so kind.  They were also affected by this couple’s enthusiasm and there were a lot of smiles throughout this process too.

The process includes the following:

The rehearsal was also the time when the couple could read out their vows in front of people.  For some, this is a very nerve wracking experience, with many doubting their Japanese pronunciation.  However, the support of the shrine staff and all in attendance, makes this a much less stressful experience.  It can actually be fun!

Once this was out of the way, it was time to get serious.  We’ll let the pictures speak for themselves. 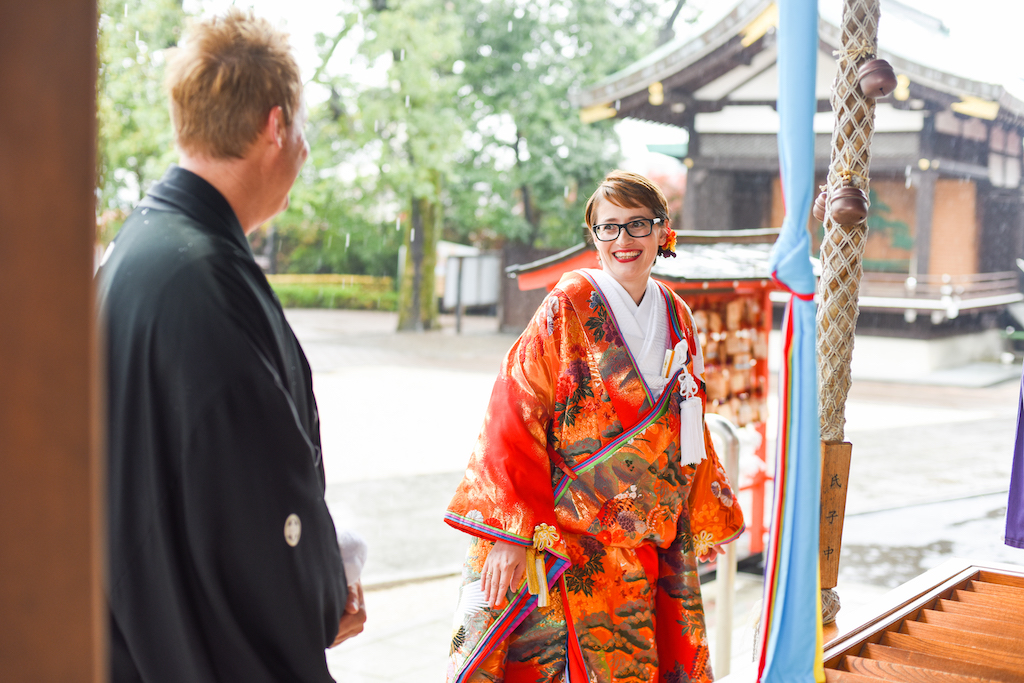 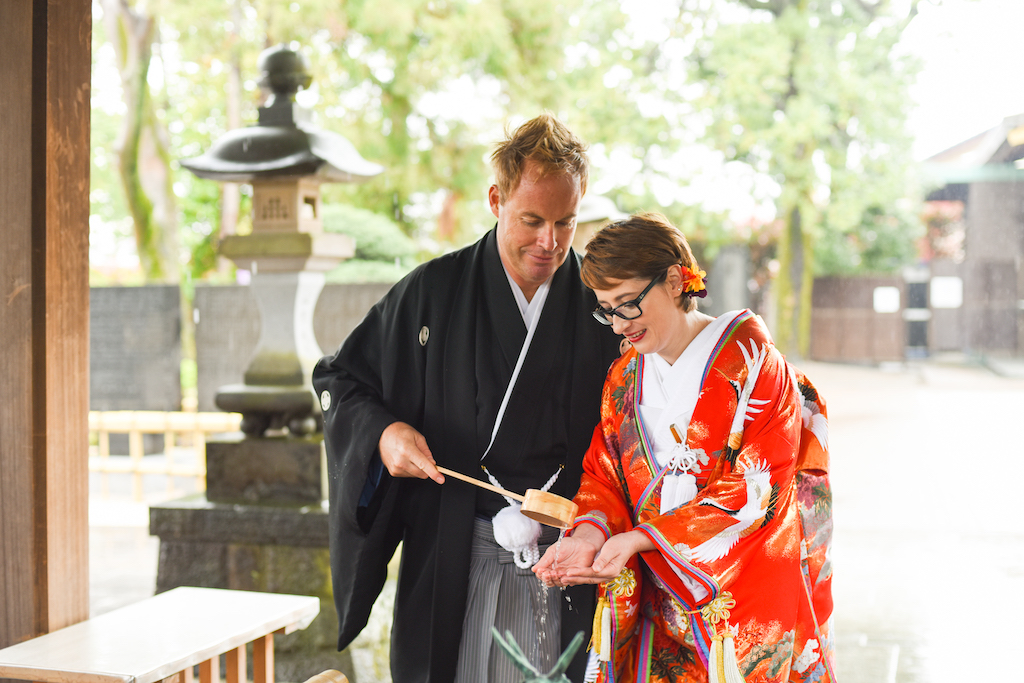 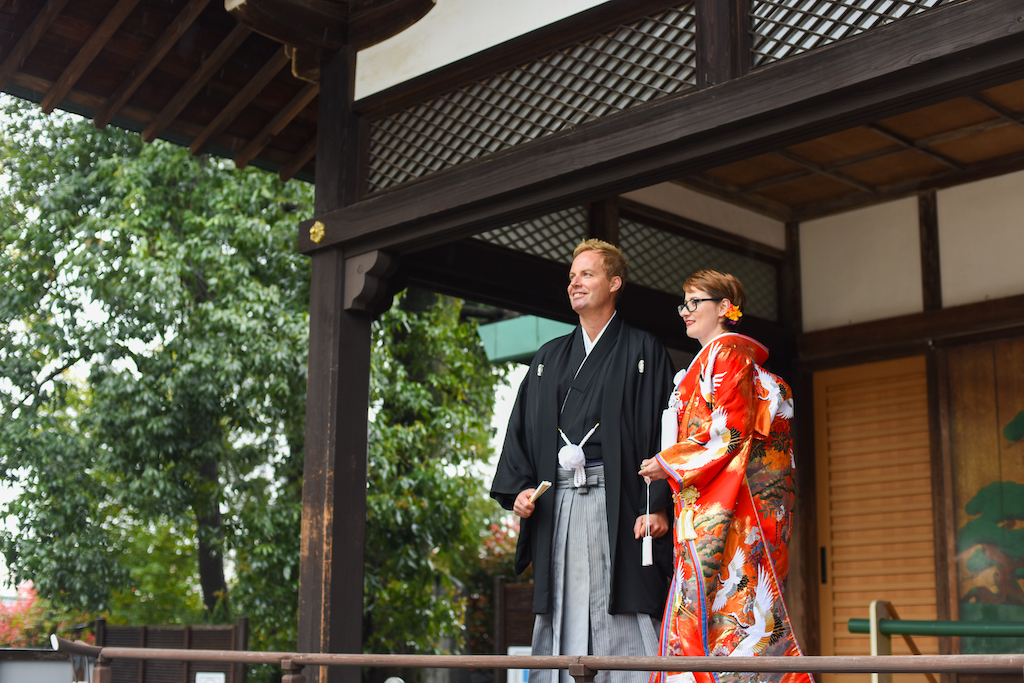 “We wanted to get married in Japan for quite a while but could not find any wedding planners who can give us authentic Japanese experience and at the same time can be a bridge between East and West (speak both Japanese and English and guide us through the process….) but Ross and Ayako did more than gave us a wonderful wedding, they created MAGIC!

Everything was so easy and smooth, well planned and just exactly what we expected and even more… would highly recommend Serendipity Flower Wedding if you want your day to be filled with magic!”

If you want your very own Tokyo Shrine Wedding, contact us today to start planning, and see just how easy it is!