This Tokyo Garden Vow Renewal… just … Wow!  This one was pretty incredible, and quite possibly the best vow renewal ceremony we have done in a long time – if not, the best ever!
The husband contacted us at the beginning of August about doing a 25th wedding-anniversary-vow-renewal on his and his wife’s visit to Japan the next month.  It was to be a surprise!  What we didn’t know however, was that the whole trip was a surprise!   This man is a true romantic – even after 25 years of marriage.  Romance is not dead!

On arrival at the airport in Germany, the wife still didn’t know the final destination.  And he wasn’t going to spill the beans just yet.  In order to keep the secret a little longer, he made her wear a blindfold and escorted her  through the airport.  He forewarned the staff at the check-in counter that this was a surprise and they were happy to get in on it, and didn’t reveal the destination.  Even at  security, she had to keep the blind fold on!

This surprise was three-fold, and at a restaurant on the other side of security, she could take the blindfold off, temporarily.  It was there that the first surprise was sprung: their best friends were coming with them!  Once the shock had died down, they went to the departure lounge, together, blindfold back on.  Then, once they were finally at the departure lounge, they took it off.   Now, she knew they were traveling to Japan!  This was the first time any of them had travelled East!
Two surprise down, one to go.

Fast forward to the following week.  Ayako and I met them at their hotel.  Ever since we found out that this was a big surprise, we were so excited to be a part of it, and started thinking how we could heighten the surprise.  Well, we decided to masquerade as tour guides, and take them on a “Japanese Garden Kimono Experience!”  She didn’t have a clue – she had no idea her husband had arranged a romantic Tokyo Garden Vow Renewal for their milestone anniversary.  After getting dressed up in their chosen kimonos we took taxis to the garden, got into position, and then, and only then, did we reveal the true purpose of the day and indeed the trip – a wedding anniversary vow renewal!
What can I say?  There was hardly a dry eye in the garden!  It was a really romantic moment, and Ayako and I were really glad to have been a part of it.  And what’s more, we have developed a friendship for life.   We invited them to our place for a home cooked Japanese meal and beer, and have an invitation to go and visit them one day in their home country.  Can’t wait!
Many congratulations to this wonderful couple.  Here’s to another 25 years of true romance! 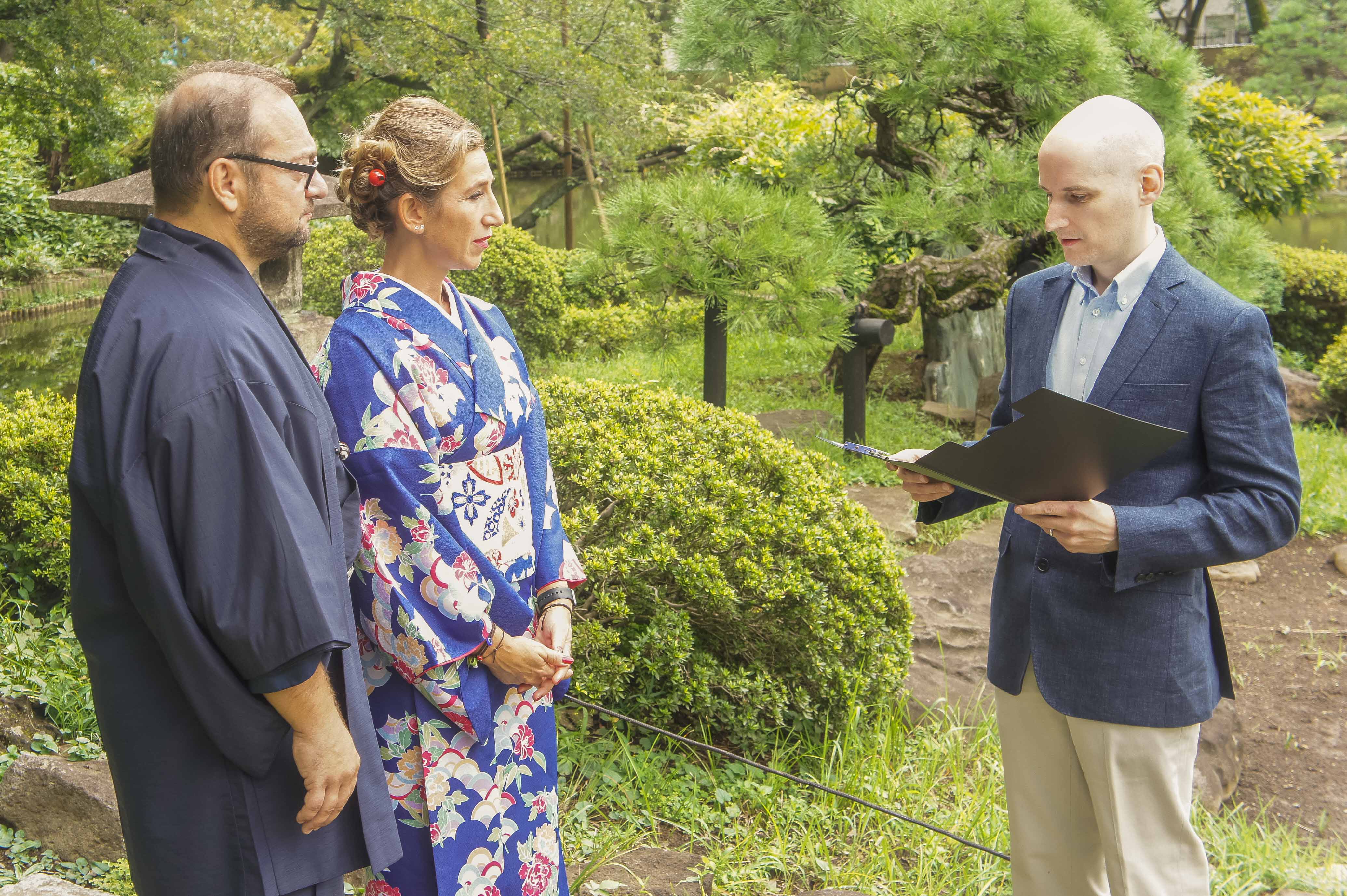 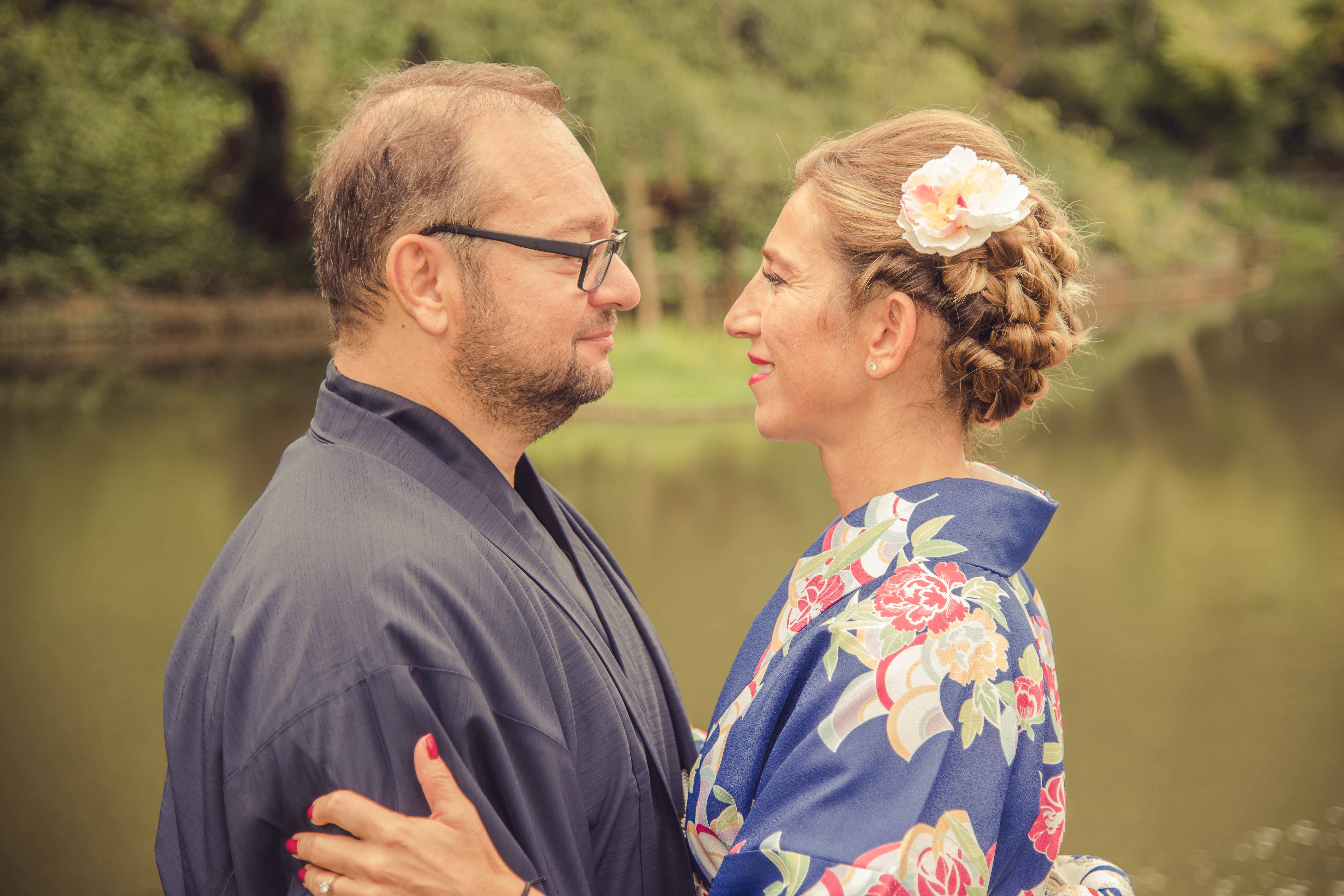 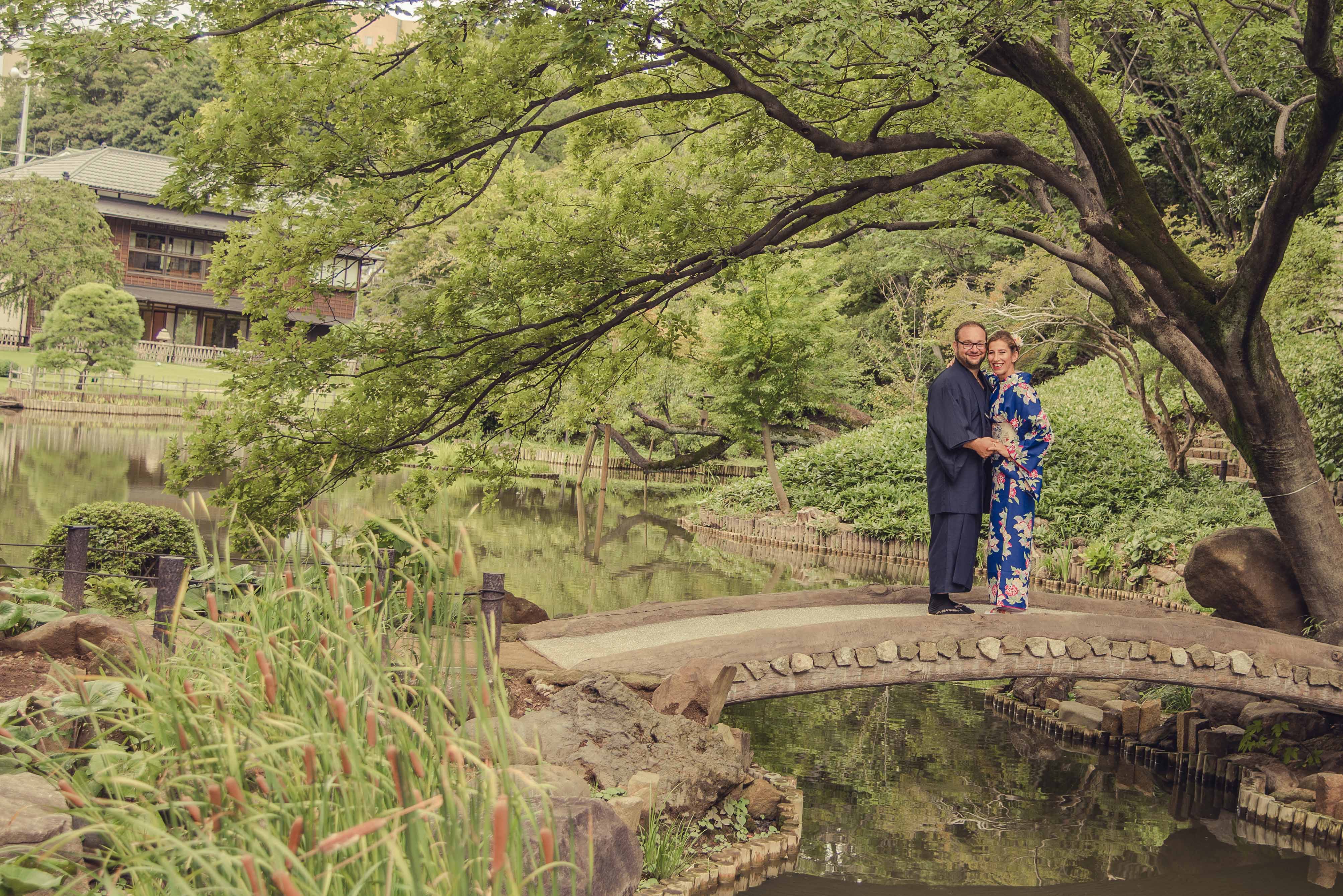 What did the Couple Say?

“The year 2018 is a special year for my wife and me, since we have been married in September for 25 years. I love to surprise my family and friends and I like to make plans which works. With the support and the experiance of Ross and Ayako it became perfect. If you are maried for 25 years you have to celebrate it somehow and my idea was to suprise my wife. I decided to travel with my wife to Japan. I booked the flightickets and the stays in Tokyo and Kyoto with not informing her 🙂

My dream was always to renew our vows but I didn´t want to travel to Las Vegas what a lot of people do. So I started to investigate if there is a posibility of renewing the vows in Japan/Tokyo…. while I was searching for possibilites I found Serendipity Flower & Wedding. Ross and Ayako did respond imediately and soon I had the feeling I am in right hands. Ross and Ayako were impressed of the surprise idea and improved it (later more). We emailed several times and decided the place and date. I received a contract which was clear and understandable.

The communication with both showed me that they are 100% trustfull and worth it. And even more, when ever I had a question whether regarding the vow renewal or other things like JR Rail Pass or restaurants I received quick reply which was very important help for me. 1 week before we departed from Germany I told my wife that we will go somewhere and she should pack her bag 🙂 It was a hard week for me with unlimited questions from my family and my wife like where we go, what we have to take with… At the airport I closed her eyes before we arrived at the counter….

We arrived at Tokyo and went to several places recomended by Ross and Ayako and had wounderful time. At our wedding day I told my wife that a tour guide will pick us up and show us the japanese culture and that we will make some pictures in a japanese garden… this was the improved version of Ross and Ayako 😉 We met Ross and Ayako first time and had the feeling that we are friends for a long time. They picked us up at the hotel and intreduced themselves as “Tour-guides”. We went to the kimono shop and choosed nice kimonos which was great experince.

Afterwards we drove to a garden which impressed us so much with its beauty. Ross and me choosed the right spot in the garden with sign language. My wife started to pose for some pictures and suddenly Ross started to tell her why we are here and who they realy are…. She couldn’t believe that this is true and the renew of vow started. It was unbelieveale romantic and we were crying a lot :). The pictures looks so great.

This trip was full of surprises and with Ross and Ayako it became perfect. We can recommend Serendipity Flower & Wedding warmly for any activity or event round about wedding or renewal of vow.”

For your own vow renewal, surprise for not, email us at info@serendipity-flower.com.  Alternatively, send us a message on our contact page and we will get back to you as soon as possible.