This awesome, fun-loving couple contacted us in October, and always knew they wanted to have a ceremony in spring.  They initially inquired about a Garden ceremony, but after looking into the Shinto Shrine Elopement option, they chose this instead!
They were coming to Japan for a two week trip, taking in the sights of Tokyo and Kyoto, and decided to schedule a ceremony on the Tokyo leg of the trip.  In addition to this, we  did a western wedding dress photo-shoot in a park, at 7:30am one cold Saturday morning.  However, it was so much fun working with them that it soon warmed up!
It is rare that we get to spend anytime with our elopement couples before the wedding day, and so it was all the more special to actually meet them for drinks the night before.  This enabled us to get know each other and build a rapport that is sometimes difficult over Skype.  We had a lot of fun drinking, talking and eating with them on two occasions while they were here, and feel that we have built a genuine friendship.

The weather this spring, as you may have gathered from other portfoilio posts, was cold!  However, on the wedding day itself, it was warm and sunny!  This couple, with a sunny disposition certainly brought the sunshine with them!  Ayako met them at their hotel in Shinjuku at 07:30am ready to get a taxi to the Kimono studio where they selected and changed into their kimonos.  Unusually for most brides, she picked out her kimono in a matter minutes!  For them, the idea of getting married in Spring was heavily influenced by the opportunity to coincide with the cherry blossom.   Therefore, once the bride saw the pink cherry blossom motifs on one of the kimonos, the choice was made for her.
She looked stunning, as did the groom!
All in all it took just 90 minutes for the bride and groom to get ready, after which the only thing left to do was get to the shrine.  They went separately, with the groom arriving first.

All shinto shrine weddings start with “first-meet photos”.  Unlike western weddings, where the bride walks down the aisle to meet the groom at the altar, there is no such custom here in weddings in Japan.  However, we recognize this to be an essential part of the day and so we asked the shrine especially to accommodate us with this.  They were happy to do so.  The groom arrived first, to await his bride in front of the shrine.  It is always fun to observe their reactions to seeing each other in full kimono dress and the smile on their faces made this little ritual all the worthwhile.
After a few more posed shots in the grounds of the shrine, which includes an impressive Noh Theatre stage, they went inside for the ceremony rehearsal.
This can always be  a little daunting.  As with all religions there are certain protocols and rituals that couples need to observe.  And when coupled with an exotic language it has the potential to be quite intimidating.  However, the staff at the shrine were, as always, so welcoming, kind and friendly; they put everyone at ease.  On top of that, Ayako was on hand to translate and explain the order of cermeony.   Needless to say, the rehearsal went smoothly and they were soon set for the real thing.

Just before the commencement of the ceremony, they were ushered in to a side room to relax with a cup of warm sakura tea.  Sometimes things can get a bit hectic on wedding day, and so it is good for everyone, not least the couple, to sit and take in their surroundings.  It is a way to savor the moment.  During this time, the shrine presented them with a certificate, in Japanese, which the couple signed and dated.  It is a nice little addition – makes things more formal – even if the couple receive their wedding license in their home country.
The ceremony always starts with a ritual washing of hands, before proceeding in procession to the shrine itself.  After this the priest reports the marriage to the Kami – god – then rings a bell, which brings blessings from God.  A central part of the ceremony is the ritual drinking of sake from the same cup – great for sake lovers.   Shinto followers believe that drinking sake from the same cup strengthens the bond between the couple.
Following the sake drink, it is the couple’s turn to speak.  In shinto there is a set oath that the couple must read, in Japanese.  This couple had been practicing this for months ahead of time, and it showed.  They did great!  Next was the ring exchange.  This is the same as western weddings, and always brings about great pictures – see for yourself, below!
The final part of the ceremony, is the offering of Tamagushi – a leaf from an evergreen tree.  Shinto followers believe it embodies the sincerity of the couple who are in the presence of the Kami (god).
Related Articles:
Shinto Shrine Elopement Ceremony

Because they were here during the spring, they really wanted to get some cherry blossom!  There was a little blossom at the shrine, but not too much.  And so, on a cold Saturday morning, I (Ross) met them at their hotel in Shinjuku.  From their, we went to a nearby park for a wedding dress photo-shoot.   This rounded off their experience here – they had had a traditional Japanese shrine wedding, and completed it with a dress shoot in a modern city park.  Yes, it was early, but the light at that time of morning was beautiful and the pics came out great! 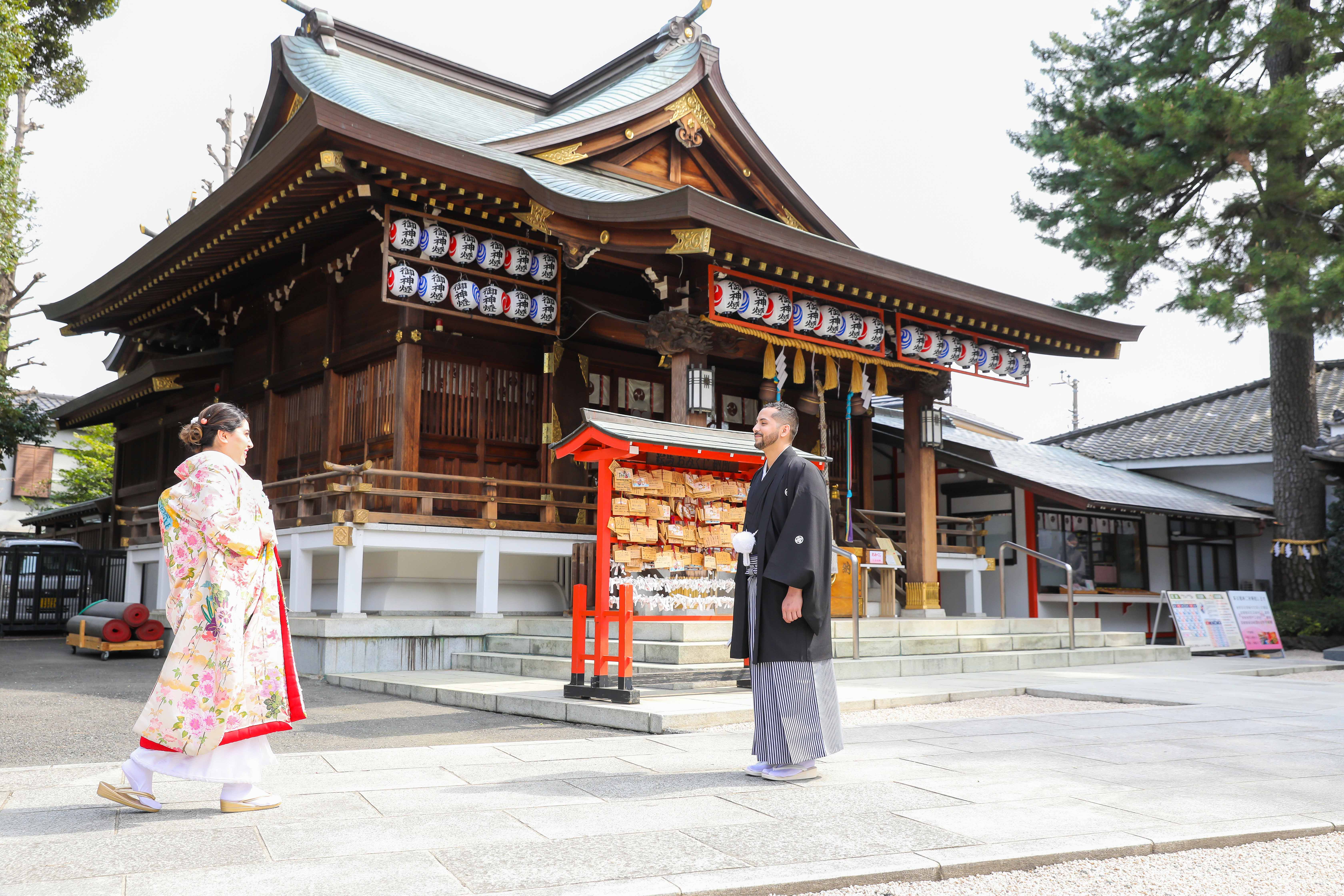 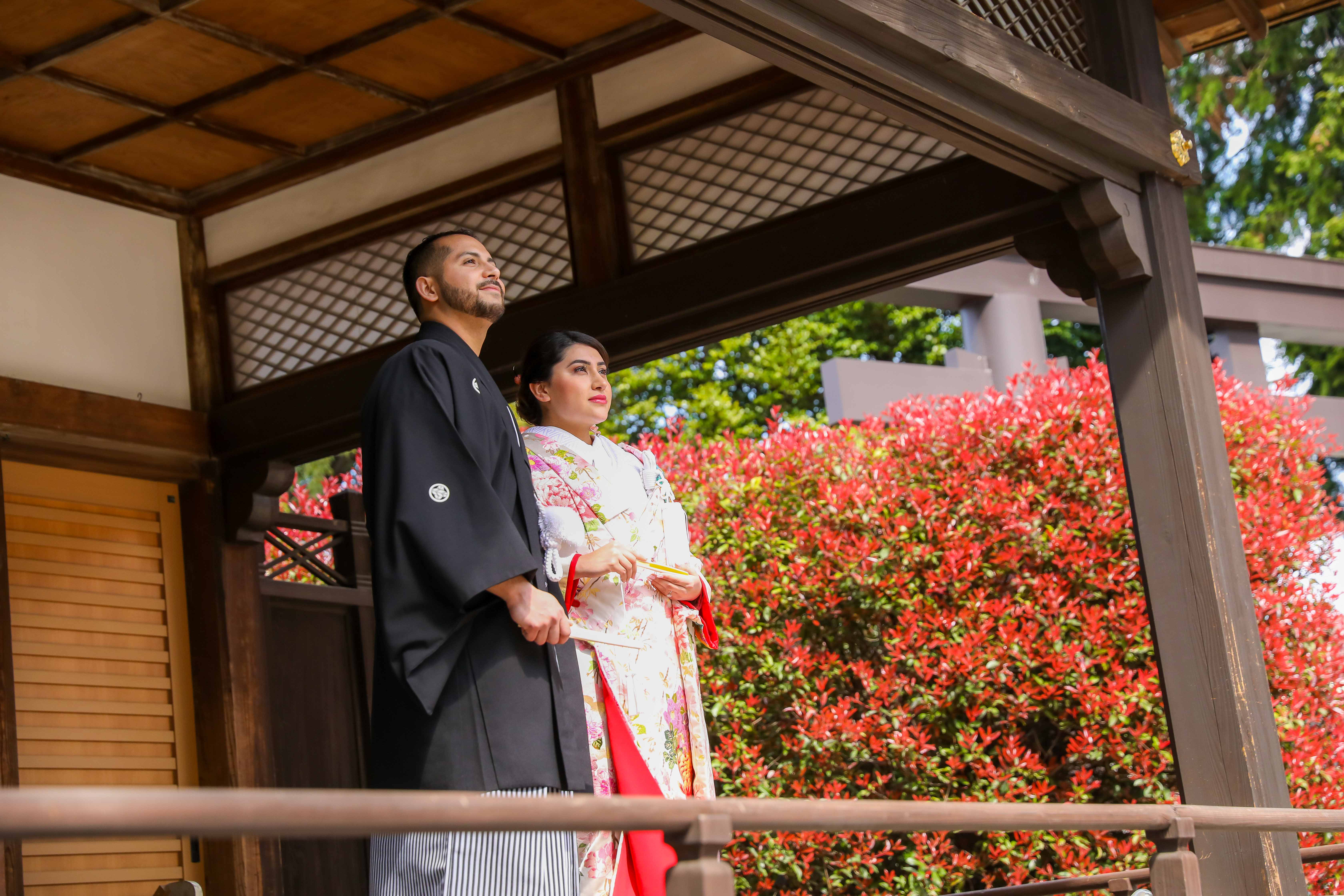 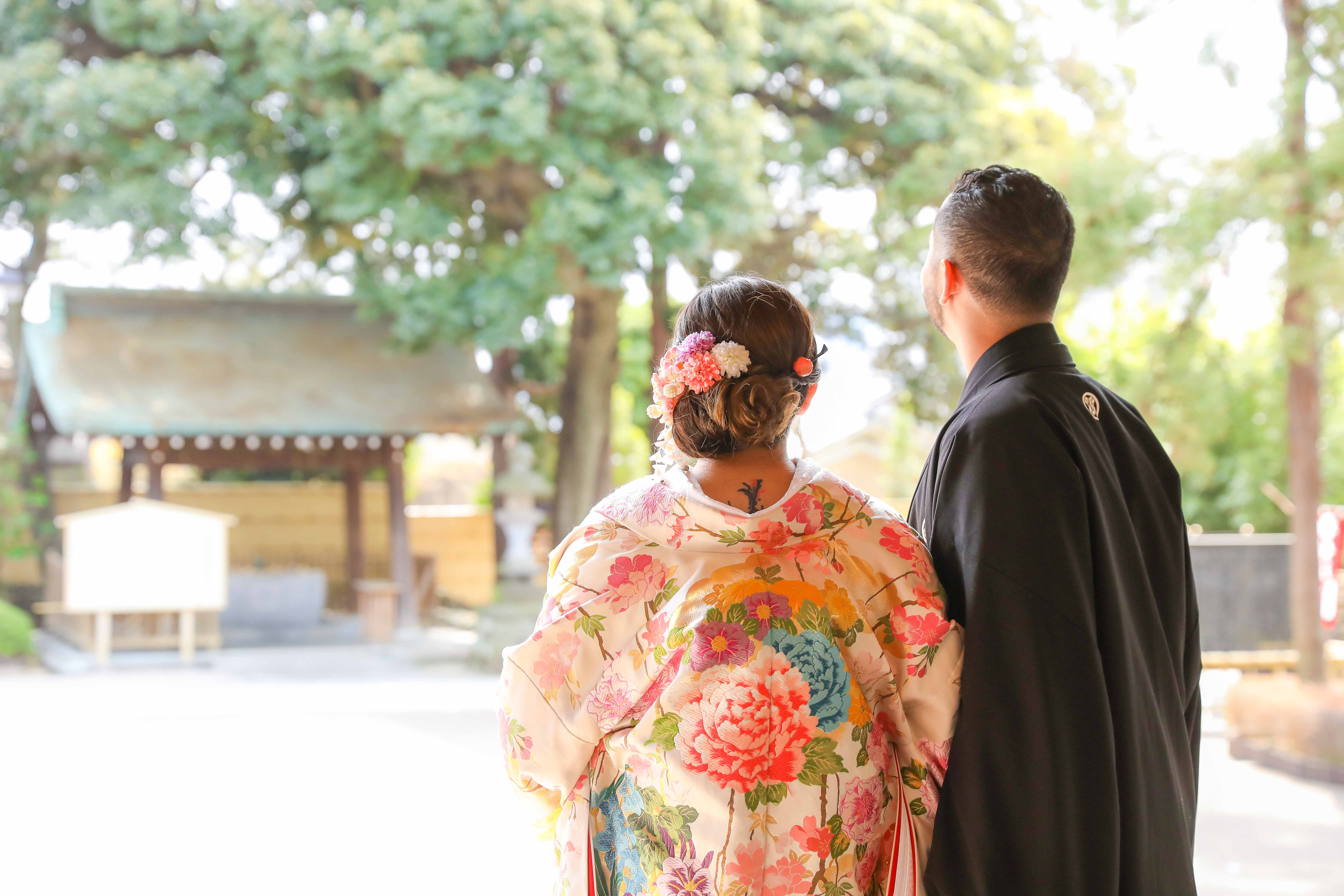 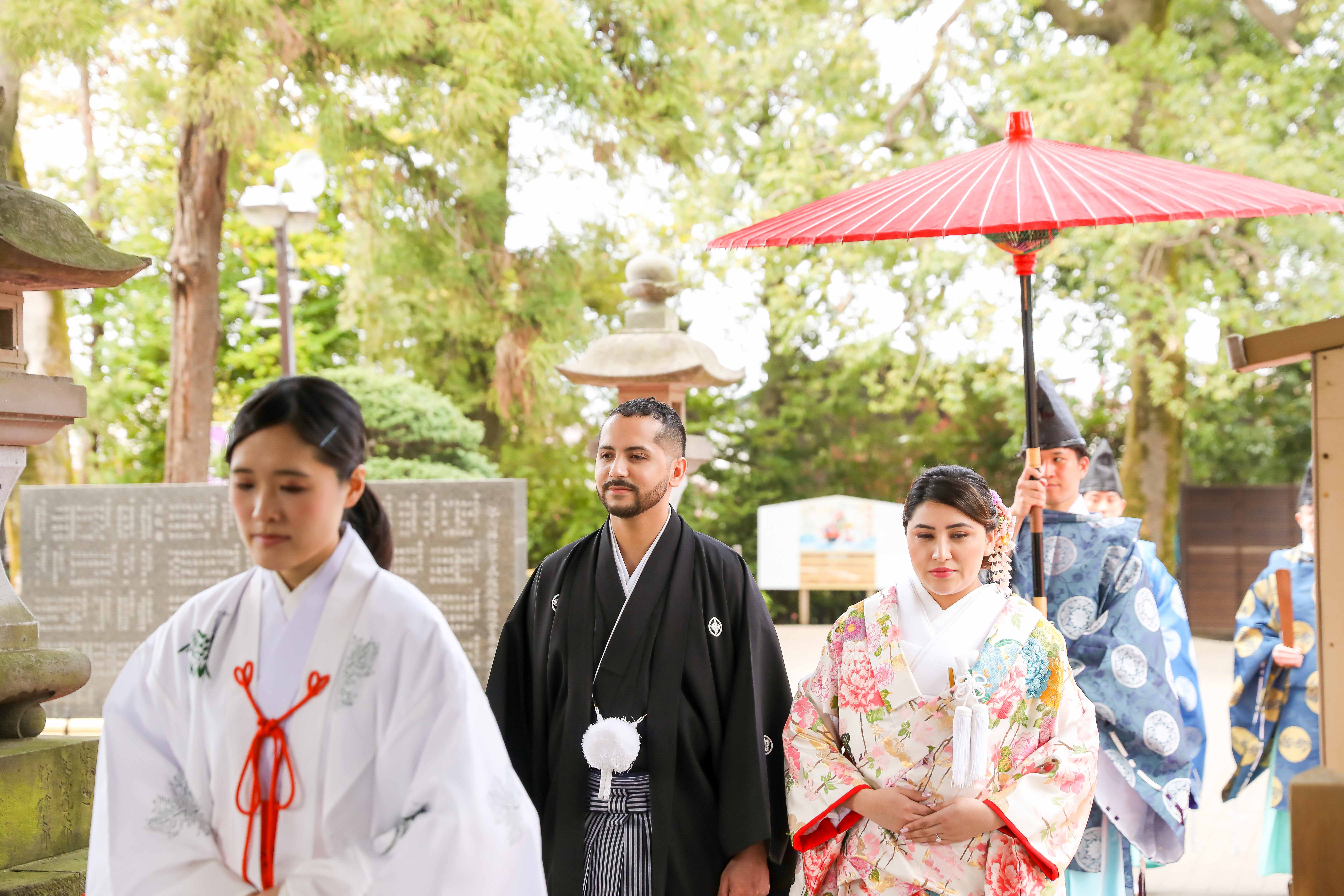 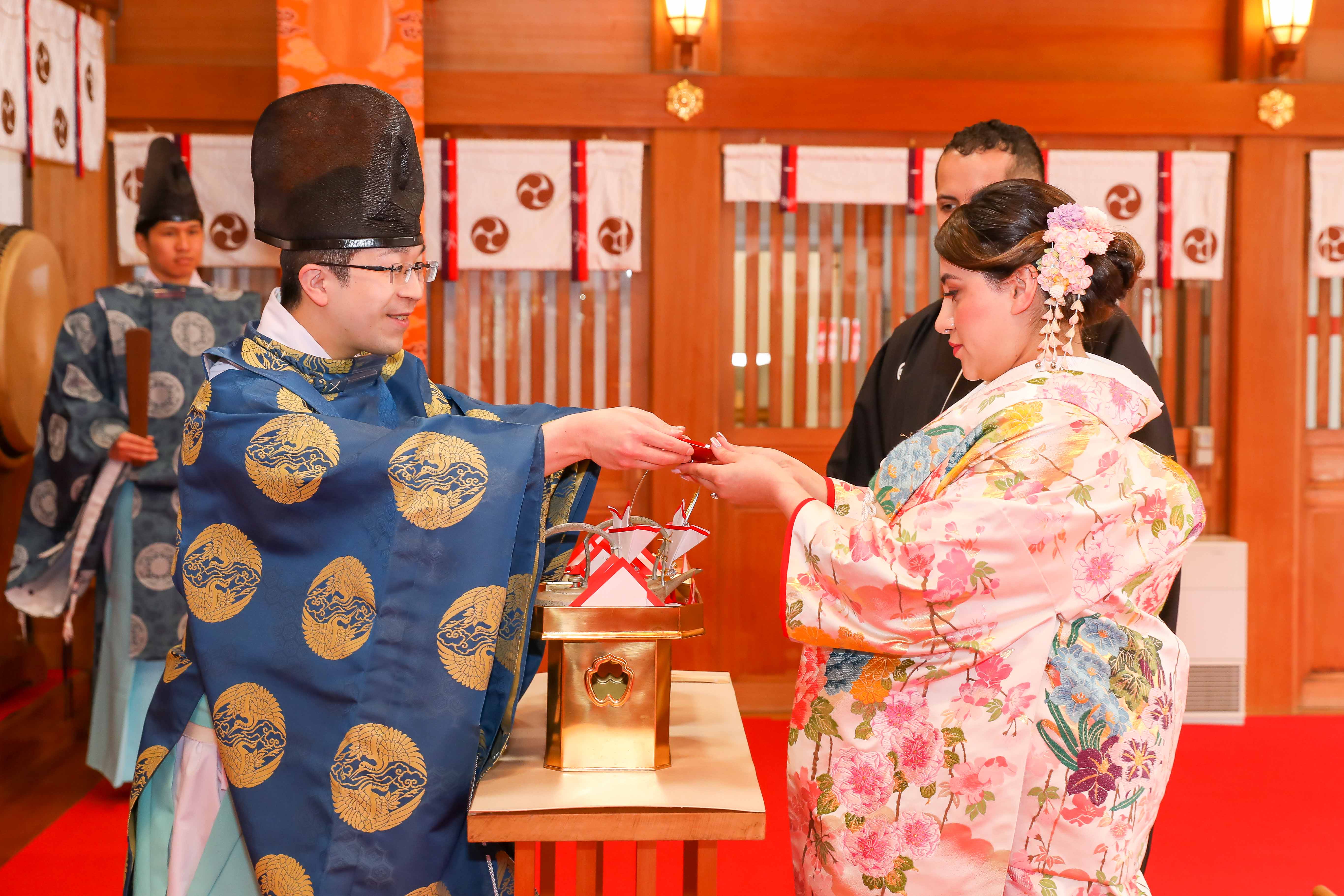 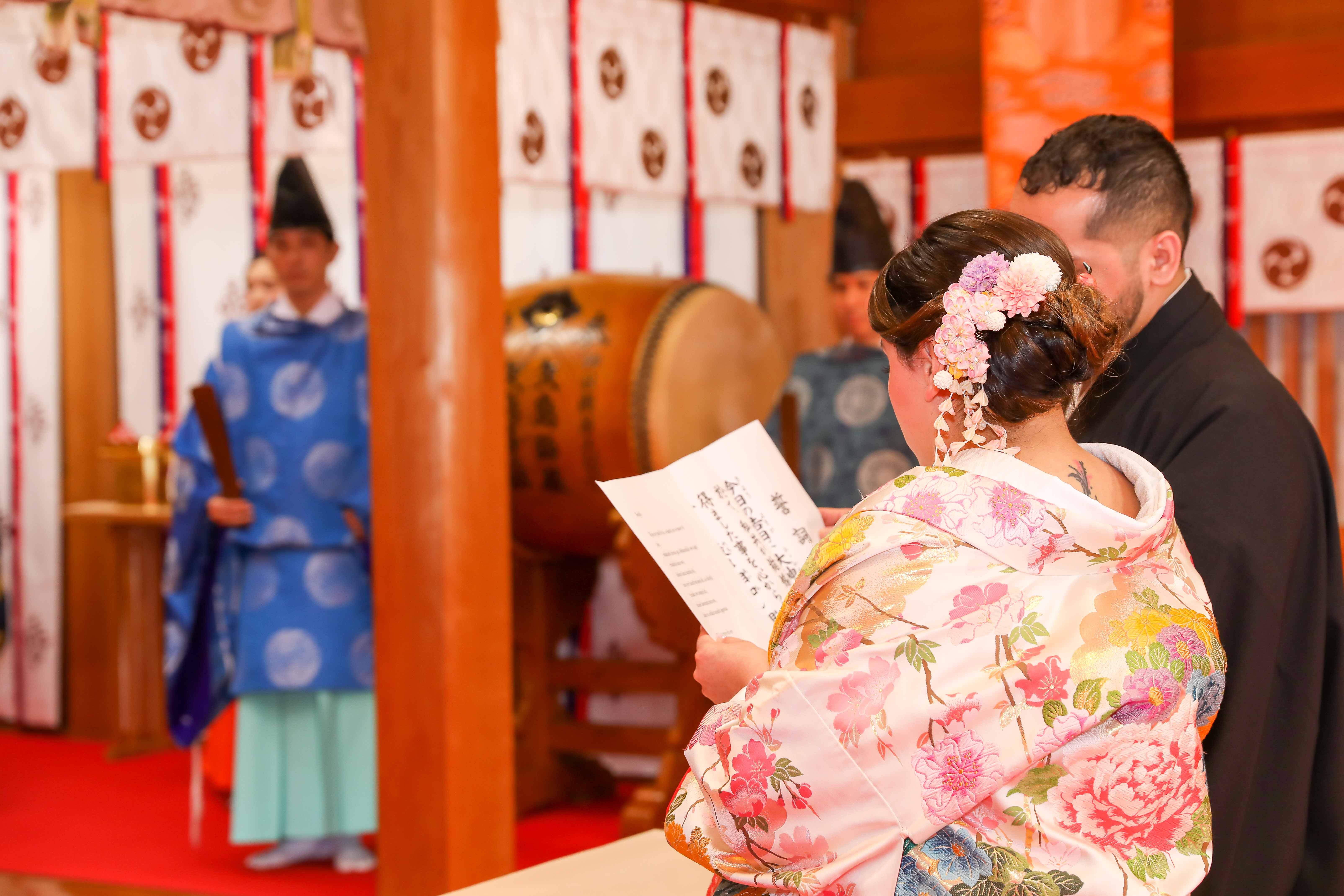 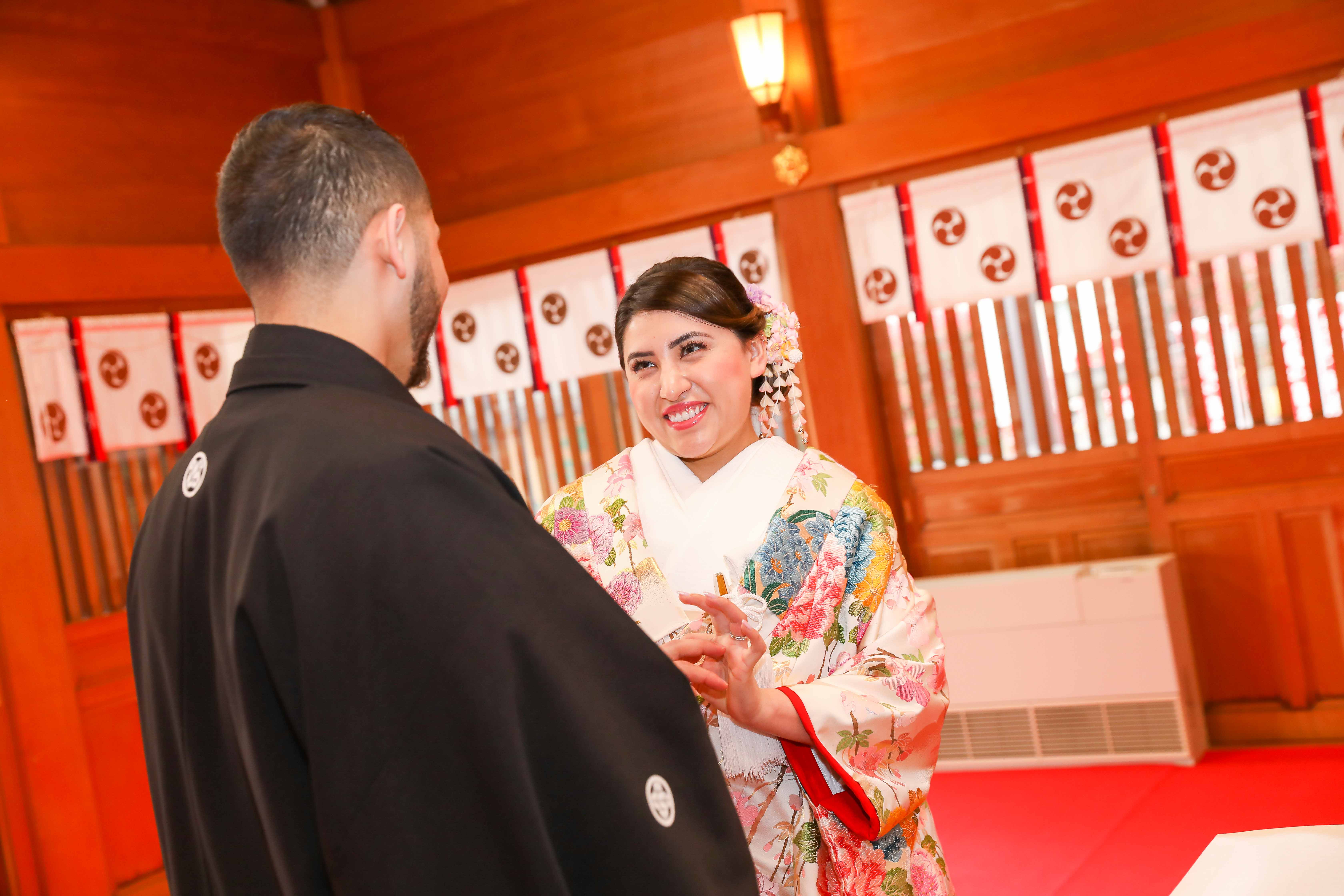 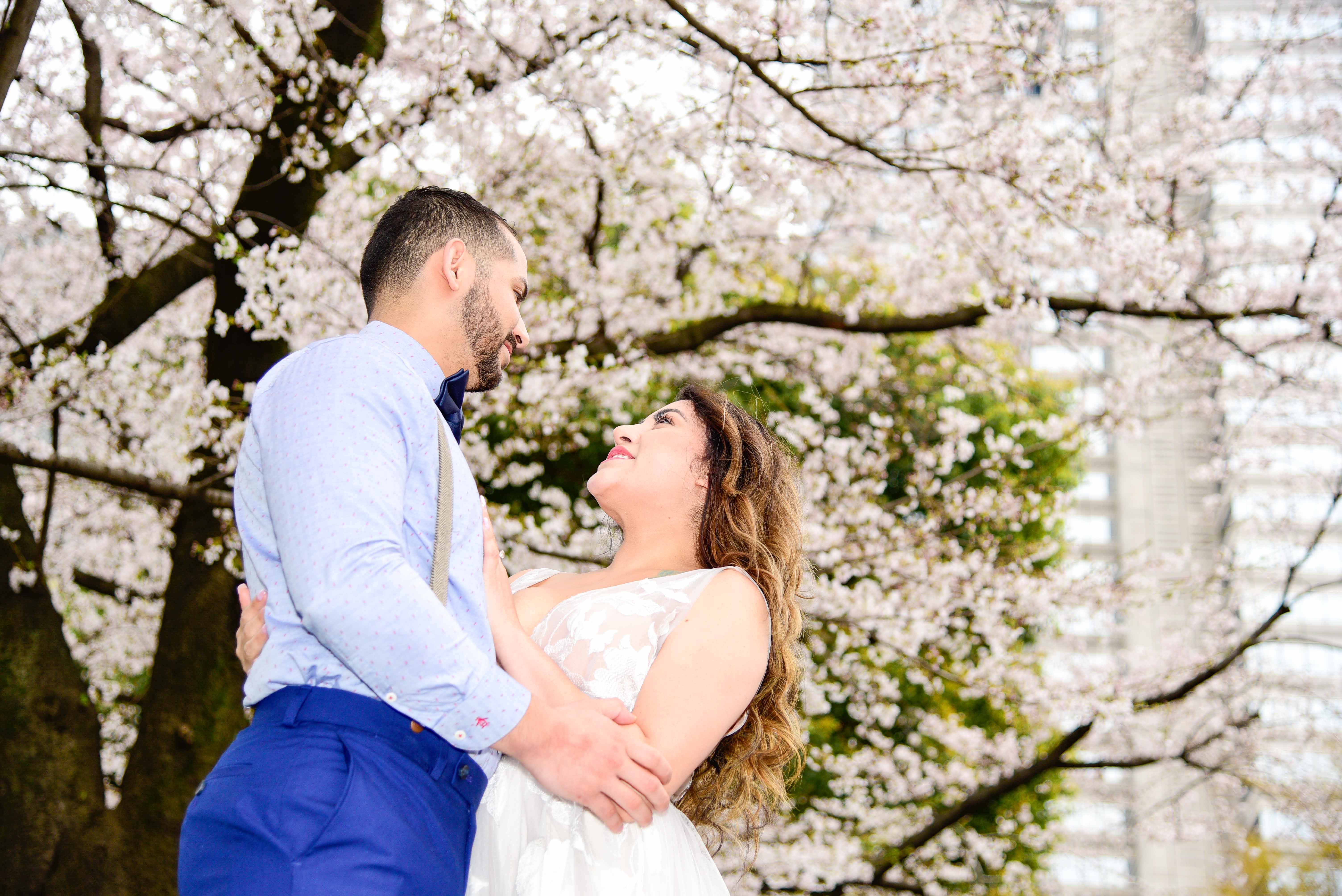 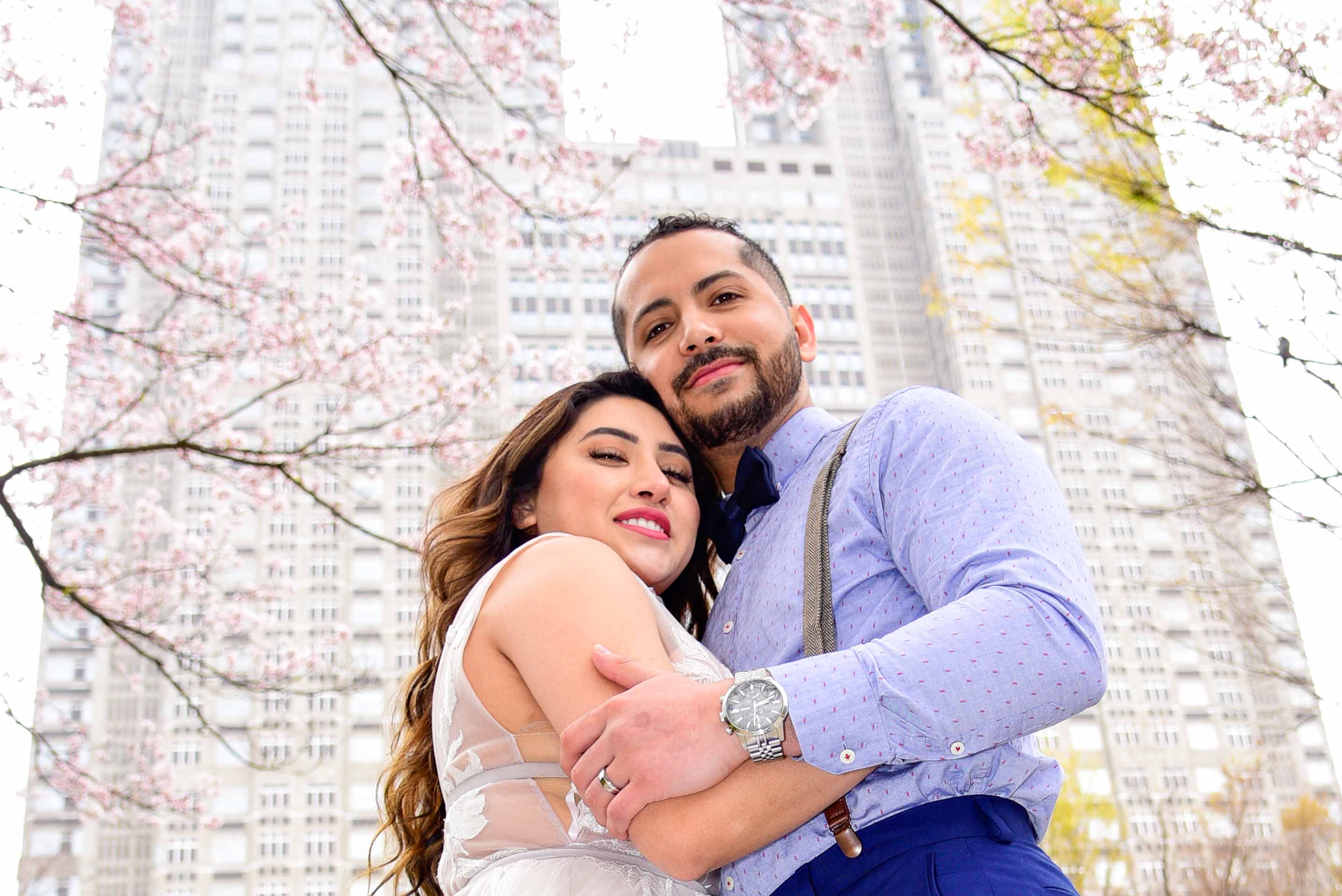 To find out how you can get married in a Shinto Shrine Ceremony and/or simply have photos in the city, contact us today, and let us help you!