This outdoor wedding in Tokyo was going to be just perfect!   We woke up to glorious sunshine and clear blue skies; a huge relief after the weeks of rain we had had in Spring.  And it was perfect.  The venue scrubbed up beautifully, the bride was gorgeous and the groom handsome, all six foot four inches of him, and everyone was happy, and we were excited!

We had never done an outdoor wedding in Tokyo before.  We have done lots of outdoor elopements and vow renewal ceremonies, but never an outdoor wedding.  Thanks to this awesome couple, we can now check “outdoor Tokyo wedding” off the list of things we want to do.  🙂

The couple, he French and she Chinese, are both lovers of running.  Indeed, they met through running, and it was their shared love of running that brought them together.  It was only too fitting that the theme of the wedding be a running race; the “altar” was in fact the race finish line!

There were medals, running bibs, race timers, medal podiums and even a race themed wedding cake.  Everything was a perfect fit for this couple.   We even joked that we could have our very own “runaway” bride; luckily that never happened!

So serious were they about their running, that it was about 6 weeks from initial contact to our first wedding planning session, due to race “meets” every weekend.  But, we finally met and kicked off the planning.

Planning an Outdoor Wedding in Tokyo

The couple initially reached out to us in early October, having already set their wedding date for the 20th April.  However, we were unable to start planning until November.  This left just 7 months to plan a reasonably big wedding.  Usually, it takes about a year, so we had our work cut out to find a venue, select vendors and design the perfect wedding.

But nay bother: the bride and groom and the two of us (Ayako and me) turned out to be something of a dream team.  Our first in-person meeting for the kick off planning session was like a meeting of friends.  We sat in the office for hours talking about the wedding and occasionally digressing.

They were very clear on what they wanted, and a breeze to work with.  We fairly quickly nailed down the venue.  That is always the hardest part, especially when there can be little to no flexibility on the date.  However, this time, it all fell into place.

The bride works in marketing and was used to making lots of image boards; she put that skill to good use here, making the planning process so much smoother than it otherwise might have been.  Together with our specialist wedding planner application, Aisle Planner, the whole process was quite straightforward, even if we only had eight months!

The venue was Love Kingdom, near Tokyo Bay.  It is a specialist outdoor wedding venue with a rustic, outdoor charm in the city, which was ripe to be decorated with race themed decor and paraphernalia.

We split up the day into four sections:

The day started early, at around 8am.  The bride & groom, groom’s men, bridesmaids, Ayako and I arrived early to start turning the venue into a race themed wedding.

The biggest job was reserved for the groom and I – erecting a finish line at the “altar”.  It was simple enough, if a tad daunting, but the results, if I do say so myself, looked rather cool! 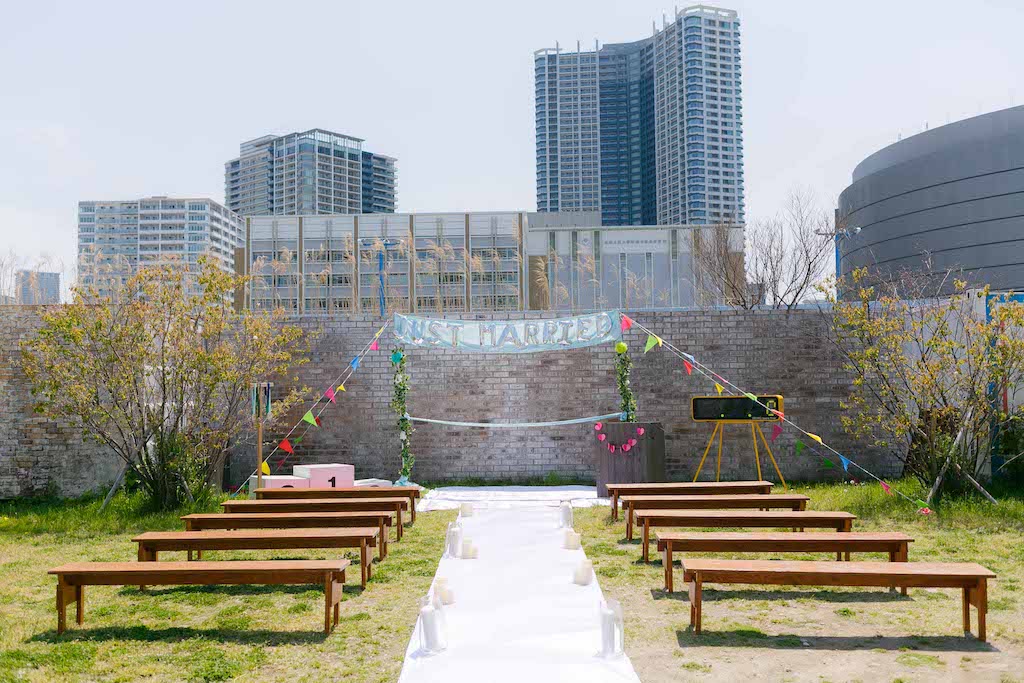 After that, it was a case of setting up the decorations and photos of the pre-wedding shoot in China, as well as a few games which would be used later in the day, during reception two.

The main concern from the vendor side, for the purposes of food service was the mixing of the two reception attendees.  We solved that problem by issuing out different colored wrist bands, one for reception one, another for reception two and yet another still for those attending both.  It worked smoothly, and everyone was happy.

With the bulk of the groom’s family and friends coming over from France, this little corner of Tokyo was transformed for the day into a United Nations assembly.  There were people from France; China; Japan; the UK and the US.

Everywhere you turned you could hear different languages being spoken – this was a true union of nationalities.  Oh, and there was laughter, a few tears, lots of drinking and games!

There seems to be a trend recently for wedding couples to play games during the reception, and why not!?  It brings two groups of people together who hitherto were unknown to each other; it will be unlikely that you will ever get the exact same people in the same room again.  Playing games, helps to create wonderful lasting memories.

As I mentioned earlier, it was the hottest day of the year thus far, I meant pretty hot, about 27/27° C: unseasonably hot for this time of year.

Now, I also sometimes officiate weddings for our clients, and I keep my script on my iPad.  And I have never had any problems until this particular day…  I made the silly mistake of leaving the iPad on the podium for 10/20 minutes before the ceremony…. in the sun…  You can see what’s coming right?!

At the start of the wedding, I take my place at the podium.  Groom to my right and groomsmen to my left.  The bride comes down the aisle; it’s all beautiful. I say my opening line, look down at the iPad, which says “warning, temperature too hot, iPad shutting down!”

That’s right, shutting down in front of about 100 people, at the start of a wedding!  The groomsman to my left was doing his best to stifle a laugh, while the groom looked amused.  Cue the panic…!

Luckily, since this was an international wedding, with guests speaking multiple languages, help was at hand.  We also had two translators, one for French and the other for Japanese.  Both had paper copies of the ceremony script, so I was able to call the French translator over, who saved the day!

Needless to say: the lesson has been learned.  Form now on I will always have hard copies of the script with me for all future ceremonies!

As usual, we used one of our favorite wedding photographers, Kohyoh Iwata, who delivered yet again.  Do check out his instagram profile and give hime a follow: https://www.instagram.com/koh.yoh/

I’ll let his pics do the talking! 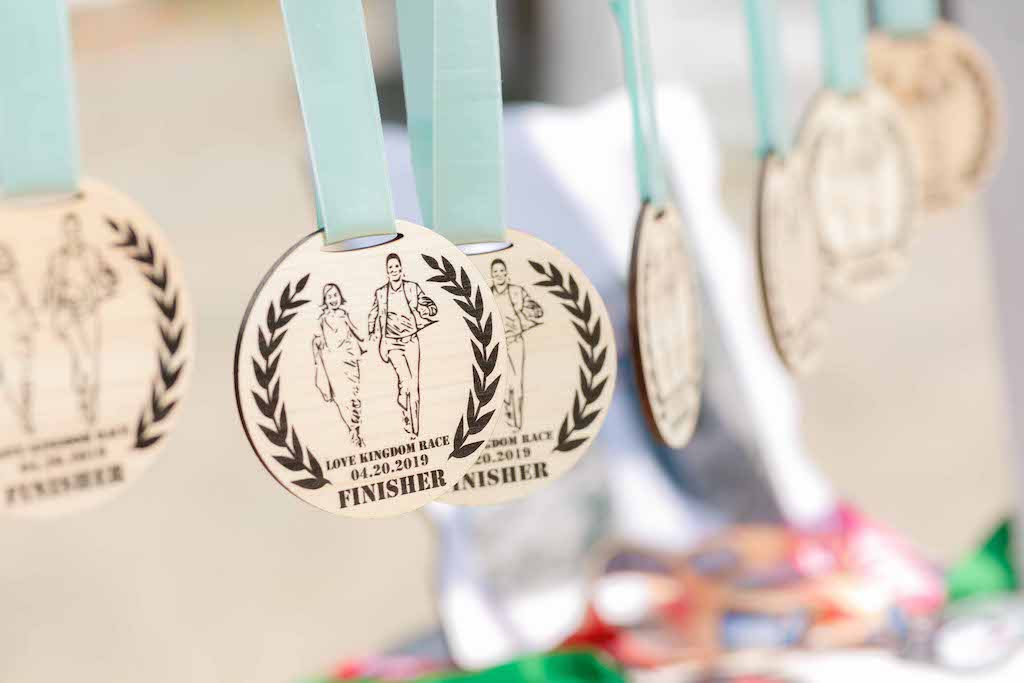 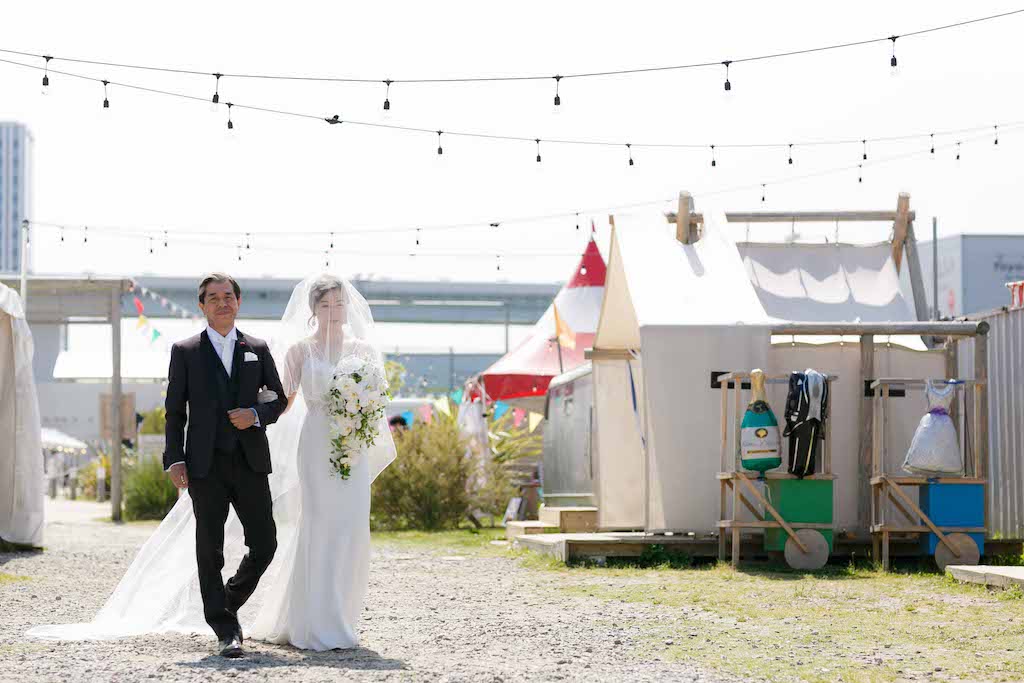 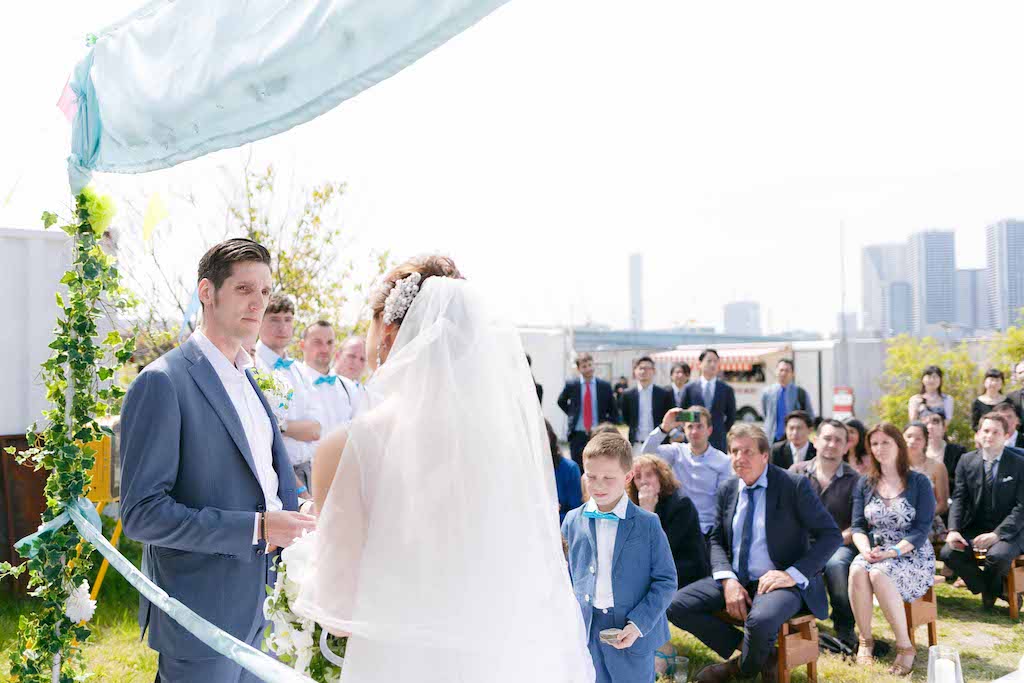 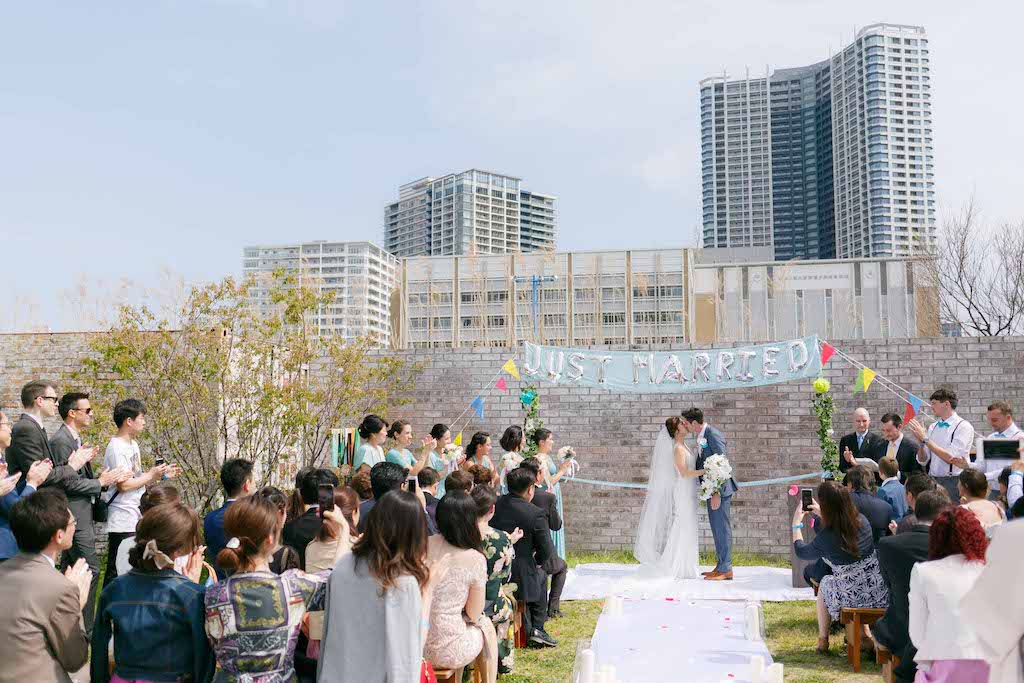 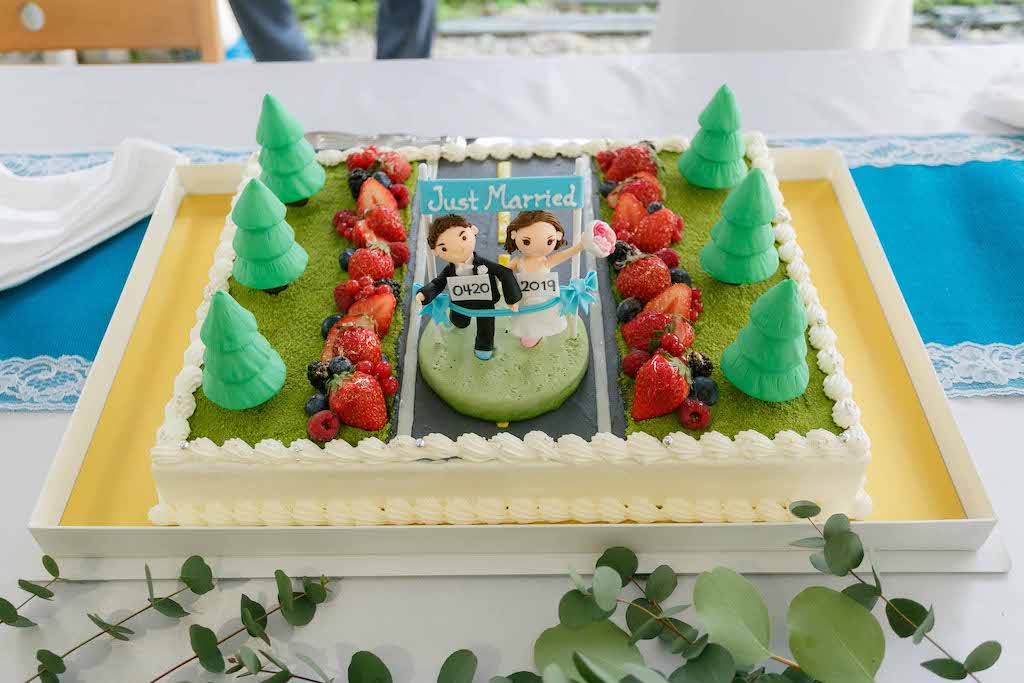 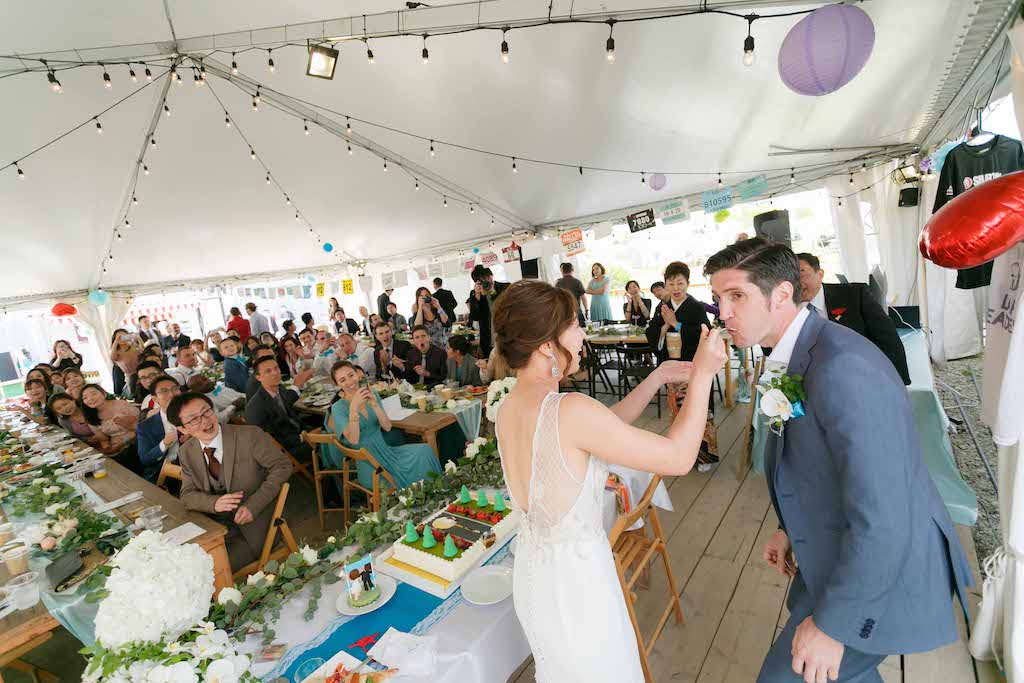 If you want to have your very own themed wedding, outdoors or otherwise, right here in Japan, contact us today and let’s start planning!