It was a stunning day for this Japanese shrine wedding!!

This was our first couple from Italy; the result of a new partnership with Alchimie Weddings, Milan.  The brief was simple, a beautiful Japanese shrine wedding for the couple, complete with garden photos and legal marriage filing.

Simple, until we found out just how intricate and complex legal marriage applications are for Italians in Japan.  This was compounded by our discovery that Italians have three types of Birth Certificates, and the bride had the wrong one, a fact that wasn’t discovered until the night before the application was due to be made.

This really was seat-of-the-pants type stuff.

It involved a ton of research, all the more difficult because most of the information was in Italian.  But Ayako, sleuth as she is, found all the answers and was confident that the info she had was correct.  And it was!  We did it!

This was in no small part to the team we had working with us, to whom we have to pay a special thanks.  We had the help of two Japan based Italians who provided linguistic and emotional assistance to the couple (and us!) throughout the process.

Due to the brief, we had to work with this couple over two days.  One day for the marriage application, involving a trip to the Italian embassy to collect the CNI (certificate of no-impediment) and then to the city hall in Shinjuku to formally apply for the marriage certificate.   The other day for the beautiful shrine wedding ceremony.

Thankfully, at the embassy our team of Italian language supporters explained the situation to the embassy staff regarding the birth certificate.  The embassy saved the day, by issuing a formal letter of confirmation to assure the Shinjuku city hall staff that the bride was who she said she was.

After that first hurdle, we all bundled into a taxi to travel across town.  Next up was the small matter of making a formal marriage application at the city hall.  Here, we handed in the pre-translated documents, along with the CNI and final details to the staff who processed everything while asking a multitude of questions.  After a two hour wait, the couple were issued the certificate!  Yay!

But, according to Italian law, the process was not over yet.  We had to take the certificate to the ministry of foreign affairs for ratification, before it was handed over to an embassy certified translator for translation.  Next, this same translation needed to be ratified by the embassy in Tokyo before being sent back to Italy for the final approval by the couple’s local authority.

A lot is out of our hands and so it was quite stressful, to put it mildly.  However, the team pulled together, and with the good grace of the embassy and city hall officials the couple were able to legally apply for their marriage certificate here in Japan.  Double yay! 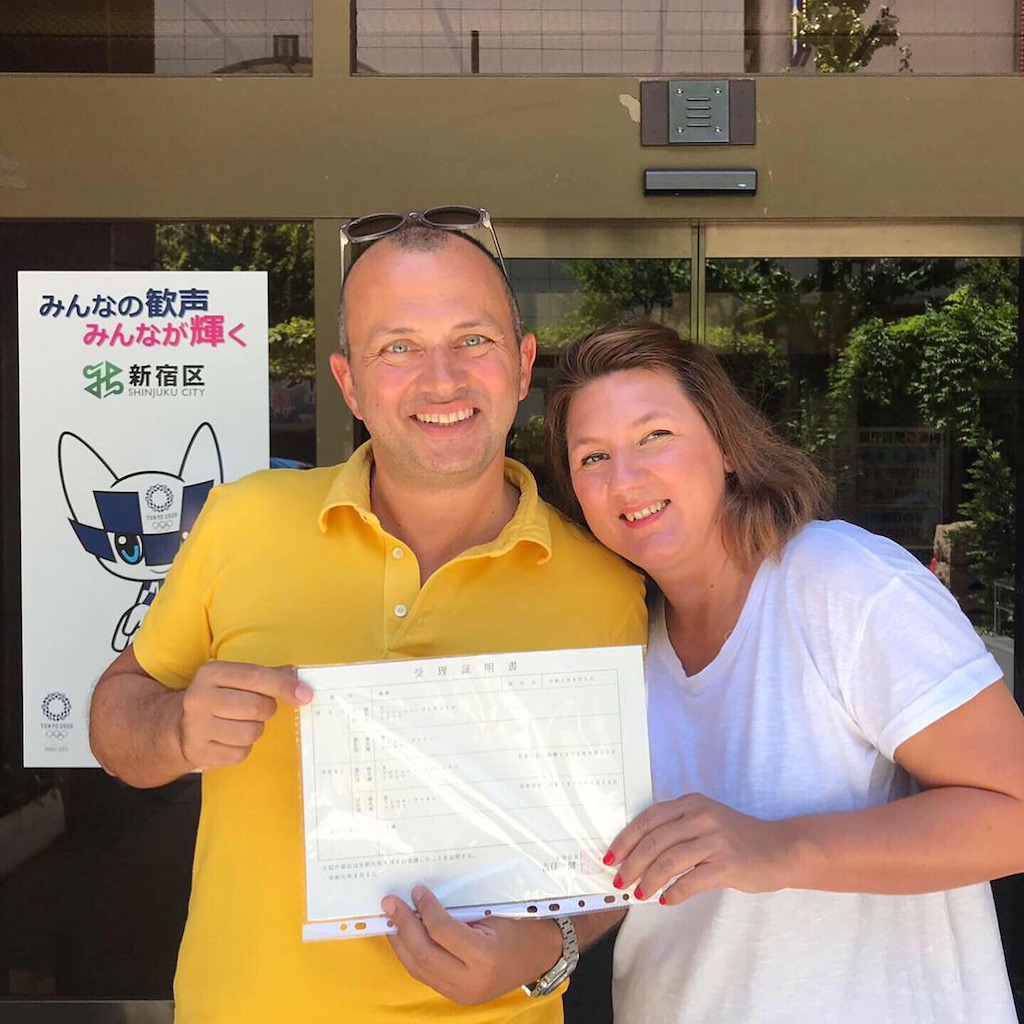 Now onto the ceremony!

Now, I don’t know about you, but I hate hot weather.  Oh, and the famous Tokyo humidity was at a crazy  80%: not the kind of weather in which you would want to wear a heavy, silk kimono… But that was what they did!

And I have to say, they handled the heat and humidity like champions!

The official photographer and I were sweating  buckets though!

As with all shrine weddings, it was an early start.  We met the couple at 7am and took a train to the kimono vendor for preparation.  This is always fun, and especially this day.  After the stress of filing for the legal application a few days before, we could really settle down, relax and enjoy the experience on this special day, heat and humidity included!

The couple were such a fun loving nature, and so game for something different; something so few outside Japan can experience.

As always, the kimono vendors were awesome and the photographer was great.  And I have to say Ayako and I did a good job too!  :-p 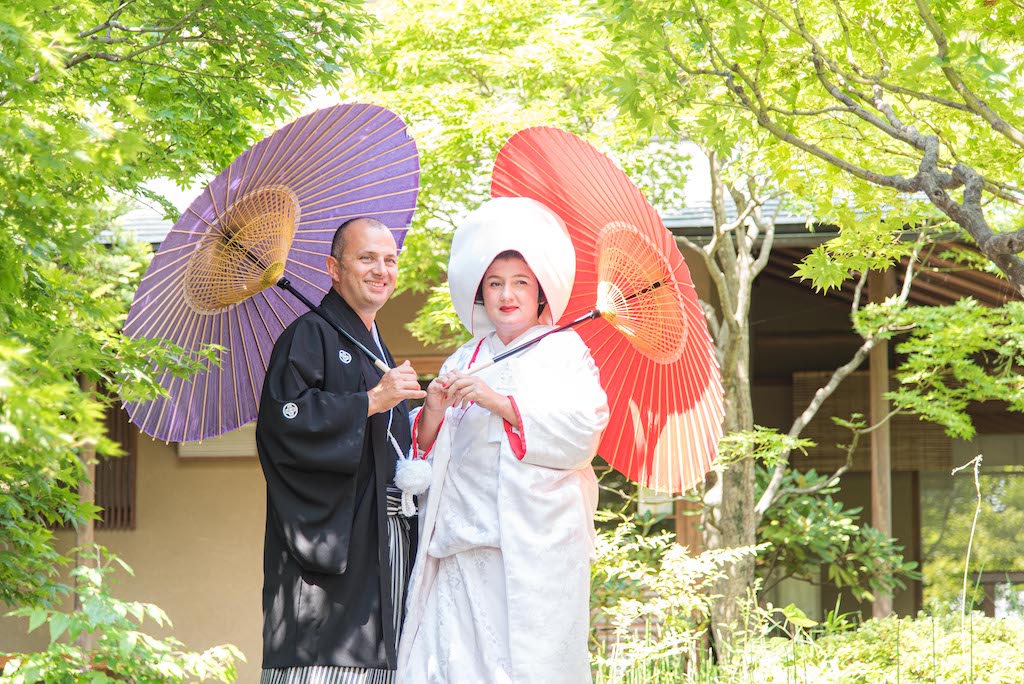 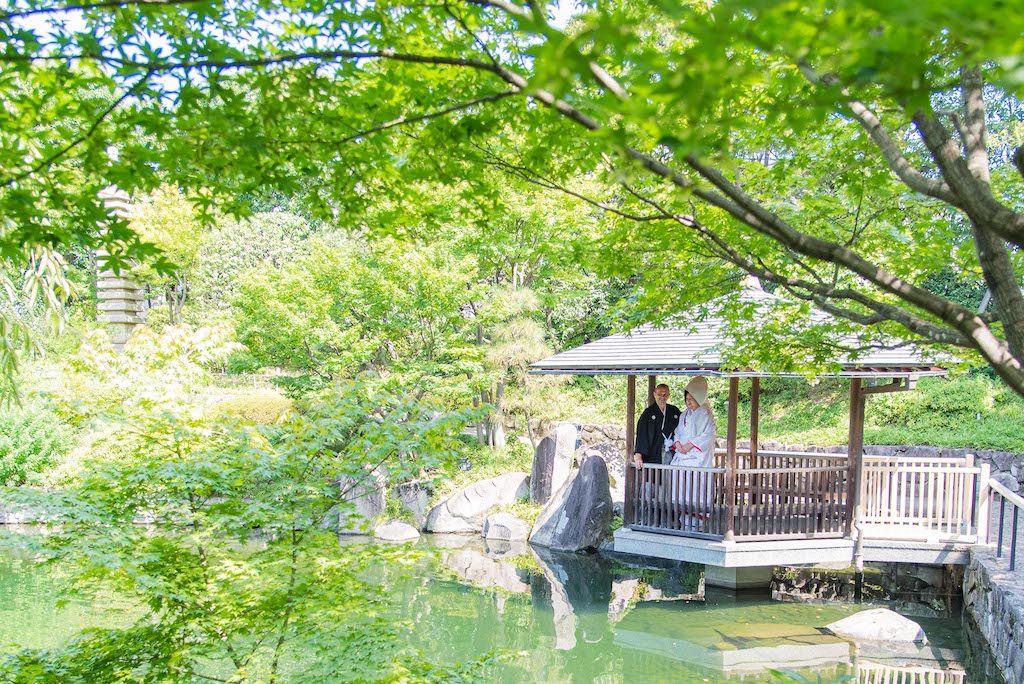 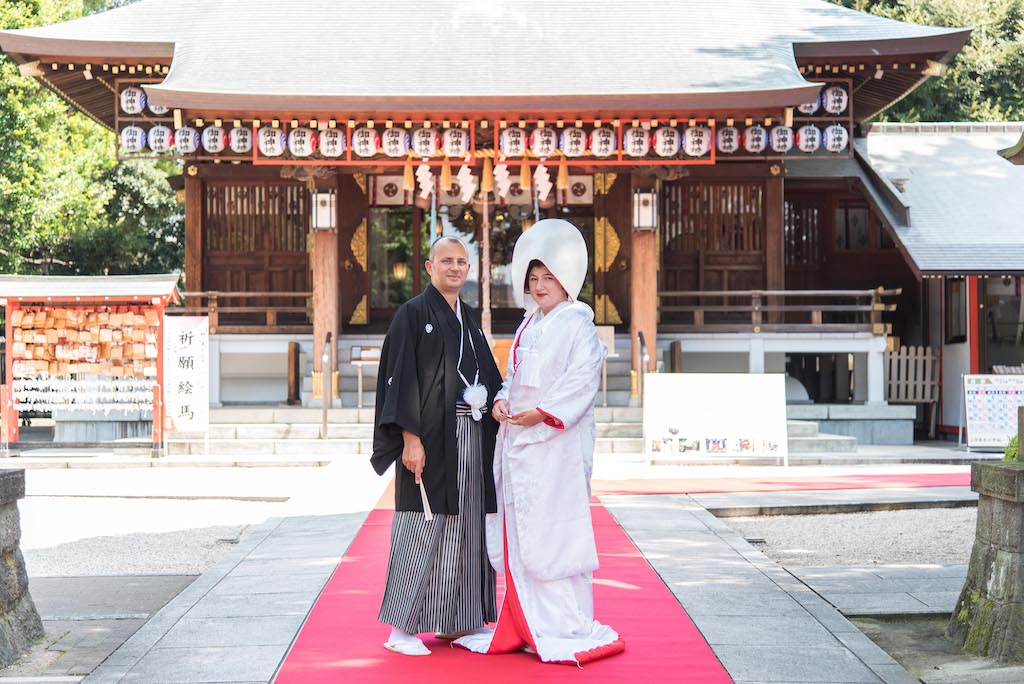 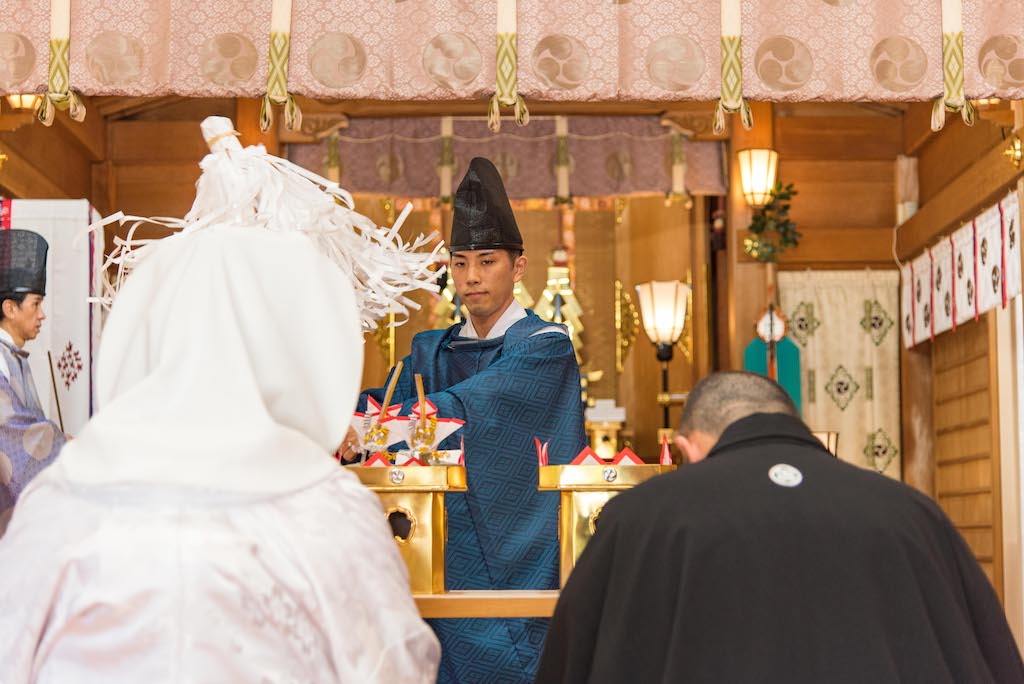 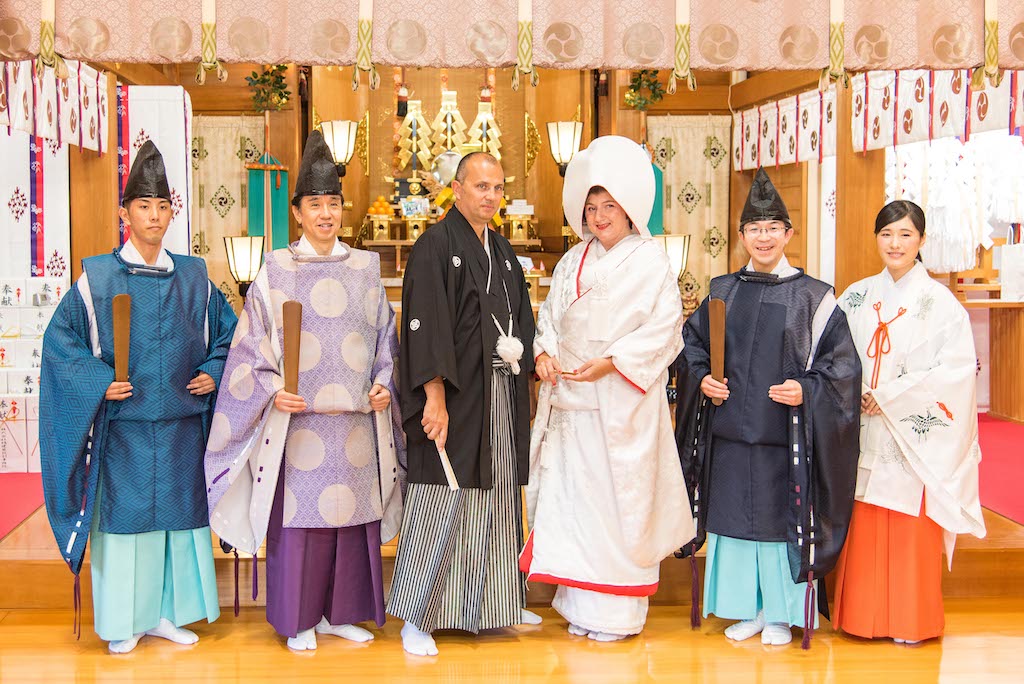 While we are happy to help couples with legal applications, we can only accept them on a case-by-case basis.  This is especially true when the native tongue of the couple is neither English nor Japanese.

We have no control over the outcome, which is purely at the mercy of embassy and city hall officials, as well as the accuracy of the presented documents.

Ready to start thinking about your Japanese Shrine Wedding elopement ceremony   If so, feel free to reach out to us today.  We would love to hear from you!