Late summer/early autumn is Typhoon season.  You may remember that several powerful typhoons swept through Tokyo late in 2019.   The first of which was the morning of this couple’s shrine elopement.  We were so concerned, that we offered them our spare room for the night, since we were closer to the shrine.  This would at least prevent them traveling across Tokyo in the aftermath of the Typhoon.

As it turns out, everything went as planned, perhaps even better!

The couple first reached out to us in February, but after several emails the conversation petered out.  We just assumed they had lost interest – it happens!  But, out of the blue, a few months later, in July, they contacted us again to confirm they wanted to go ahead.

The bride had actually become pregnant in the interim and so all attention was on digesting this new reality.  And indeed if they could even travel while she was heavily pregnant.

The brief was simple – a Japanese shinto elopement wedding and legal marriage application with a few pictures in Tokyo.  We are getting used to legal applications now, but this one was a new experience.  The couple are German and so we had to learn a whole new process.

It turns out, Germans don’t even need to attend the embassy here in Tokyo.  They get all the documents in Germany, translate them through an embassy approved translator and take those documents to the city hall in Tokyo.

It turned out to be really rather easy.  So easy in fact, that we broke our previous record for time spent in the city hall, by 50%!  German efficiency at its best!!

We caught the tail-end of the typhoon when we left the house at 6:30 am.  Although we had to reroute our journey due to cancelled train services both the couple and we were able to meet on time.  Yay!

And, by the time we had met, the skies were starting to clear and blue was peaking out from behind the clouds.  Double yay!

Meanwhile, the folks at the shrine were arriving to find typhoon debris cluttering up the grounds.   It became a case of “all-hands-on-deck” to get the grounds pristine in time for the couple’s arrival.  All the shrine attendants and even the priest got their hands dirty cleaning and preparing the grounds for the happy couple.

Back at the kimono studio, the bride was excitedly picking through and choosing a kimono to wear.  It is always interesting to see what brides go with.  Kimonos that I personally wouldn’t think to select always end up looking great.  We’ve had brides choose the traditional white and popular red, but then we have had those who choose pink, black, green, orange and even turquoise, as this bride did.  She looked stunning!

After a slight delay while the shrine staff cleared the grounds of typhoon debris, we were given the all clear to leave the kimono studio and get the show started.

As usual, I’ll let the pictures do the talking! 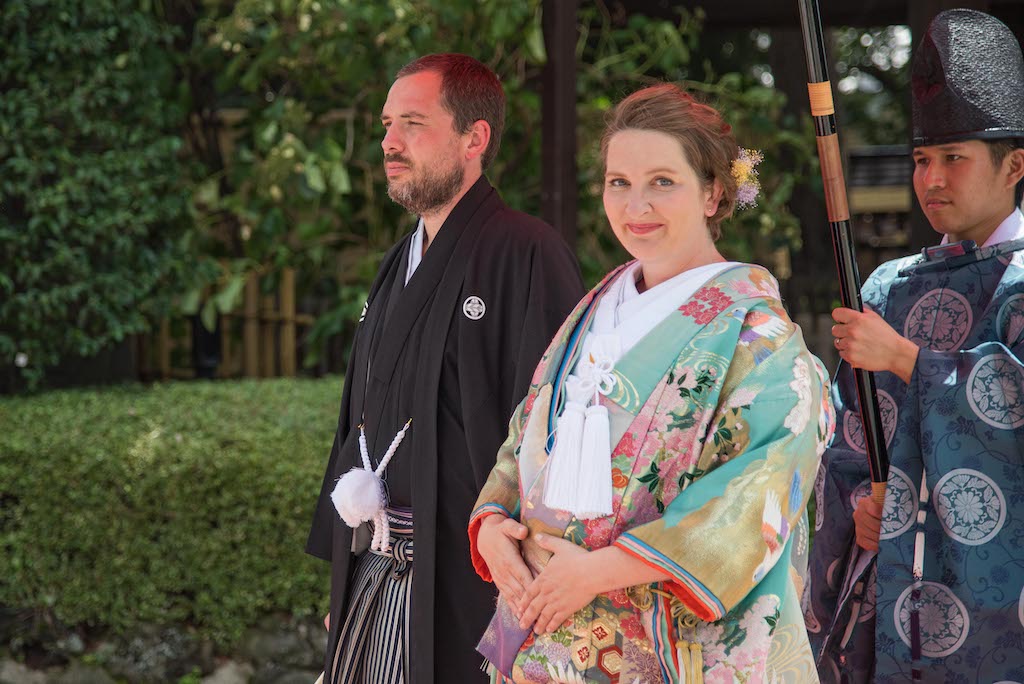 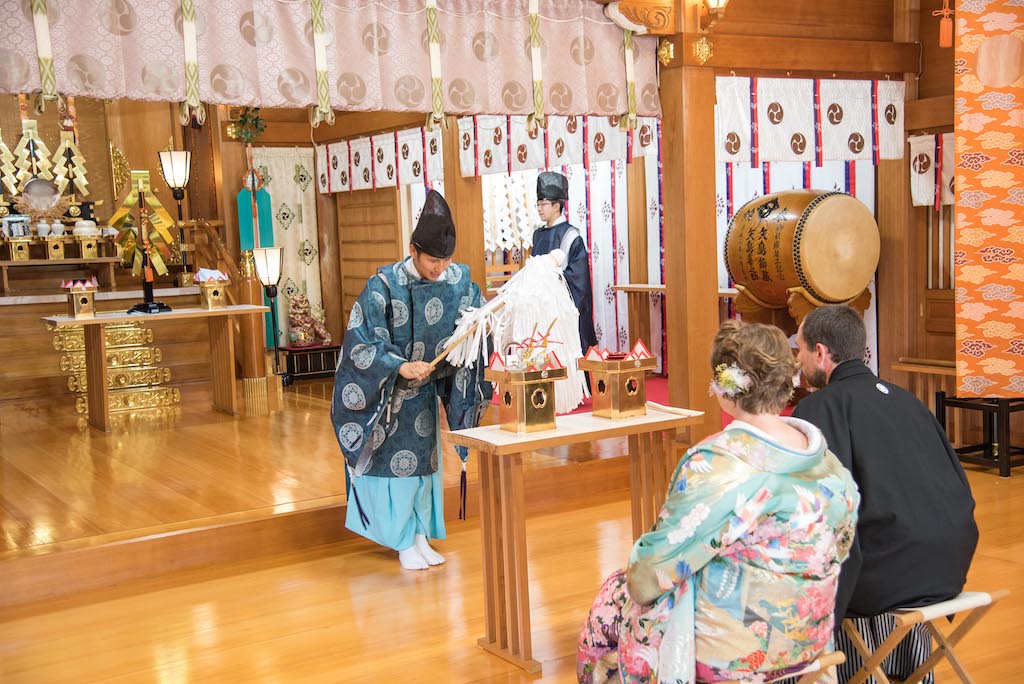 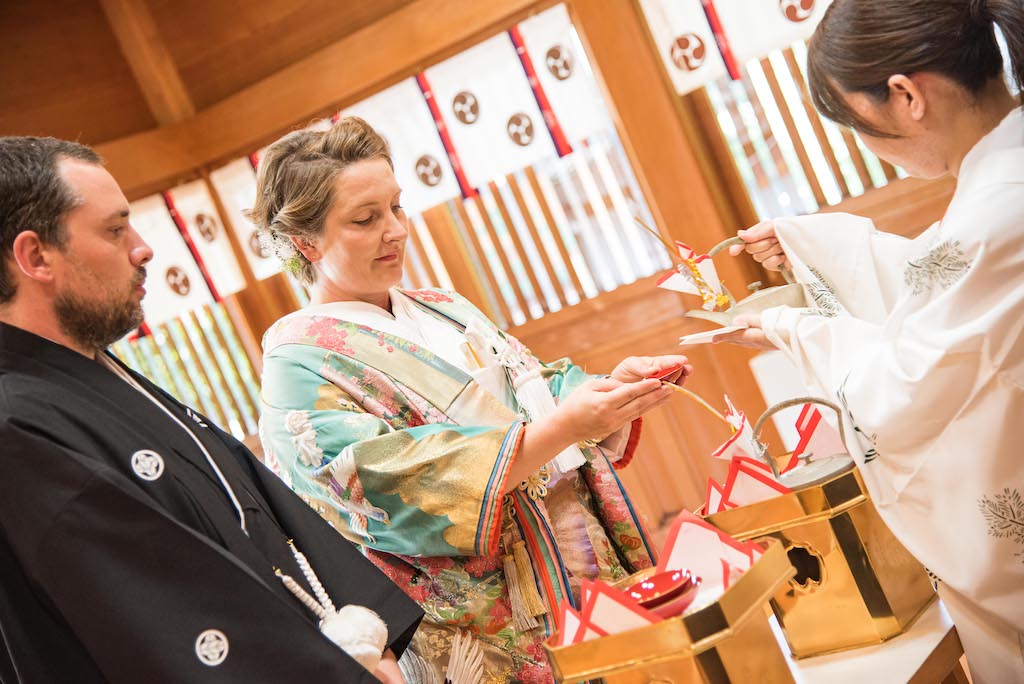 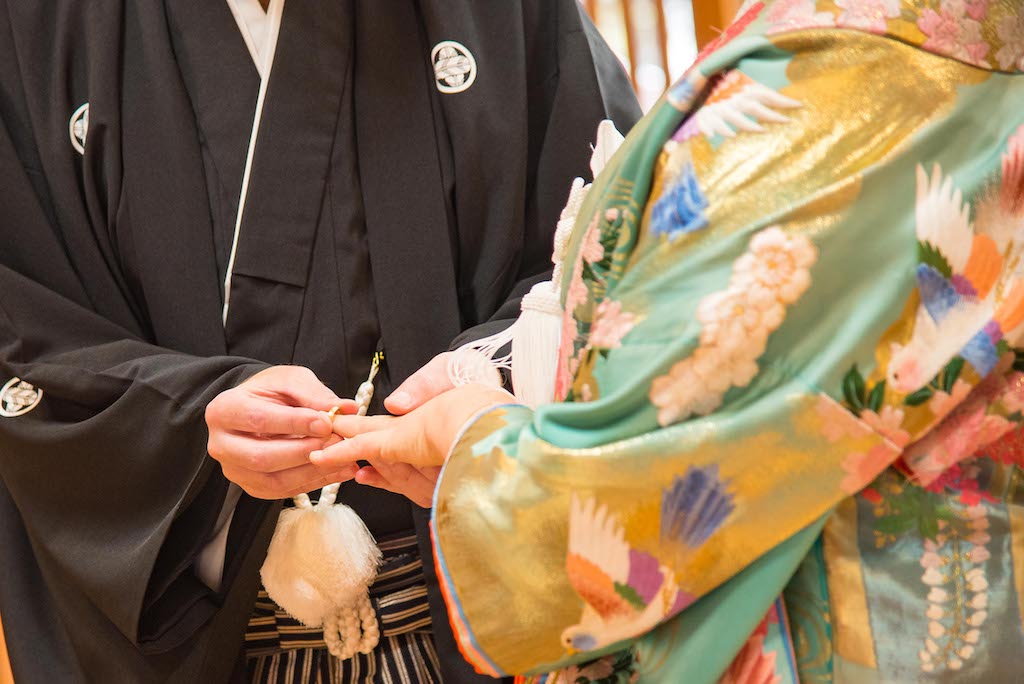 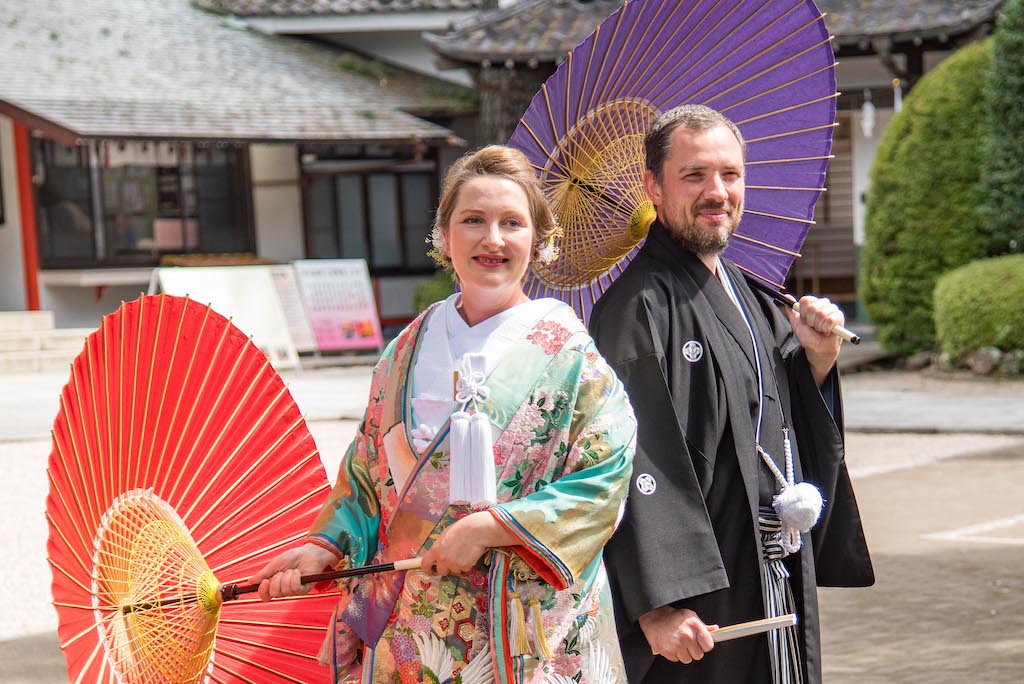 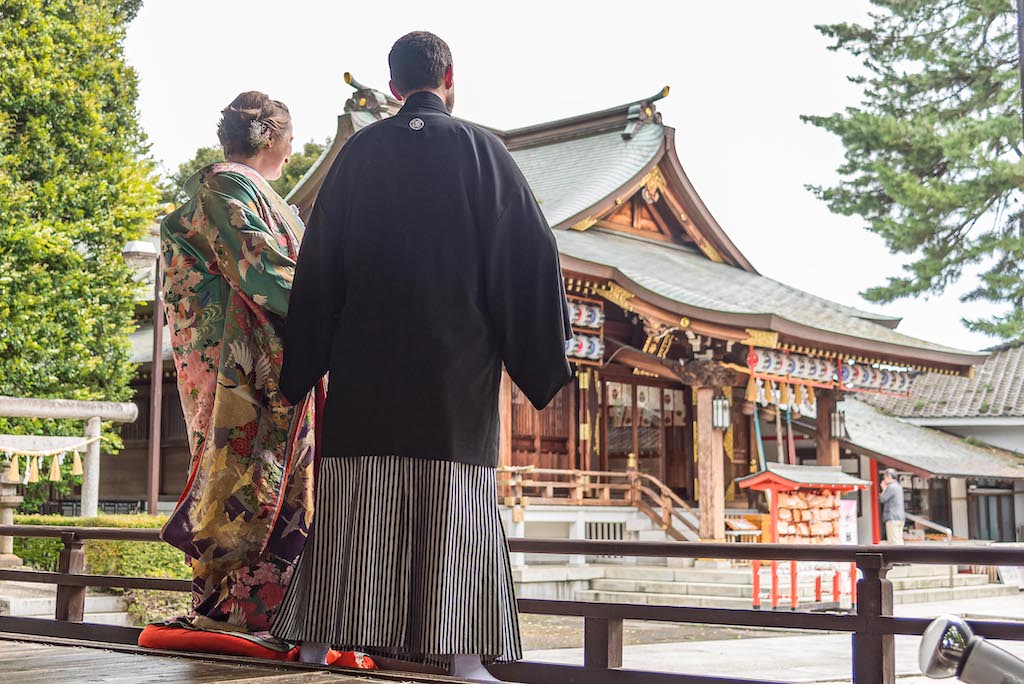 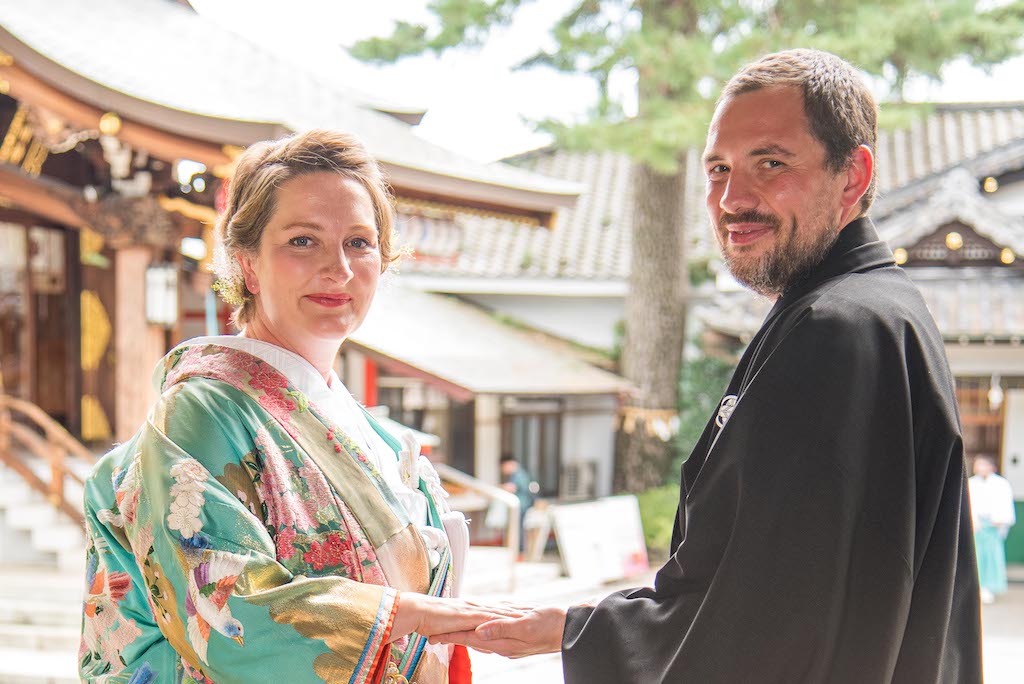 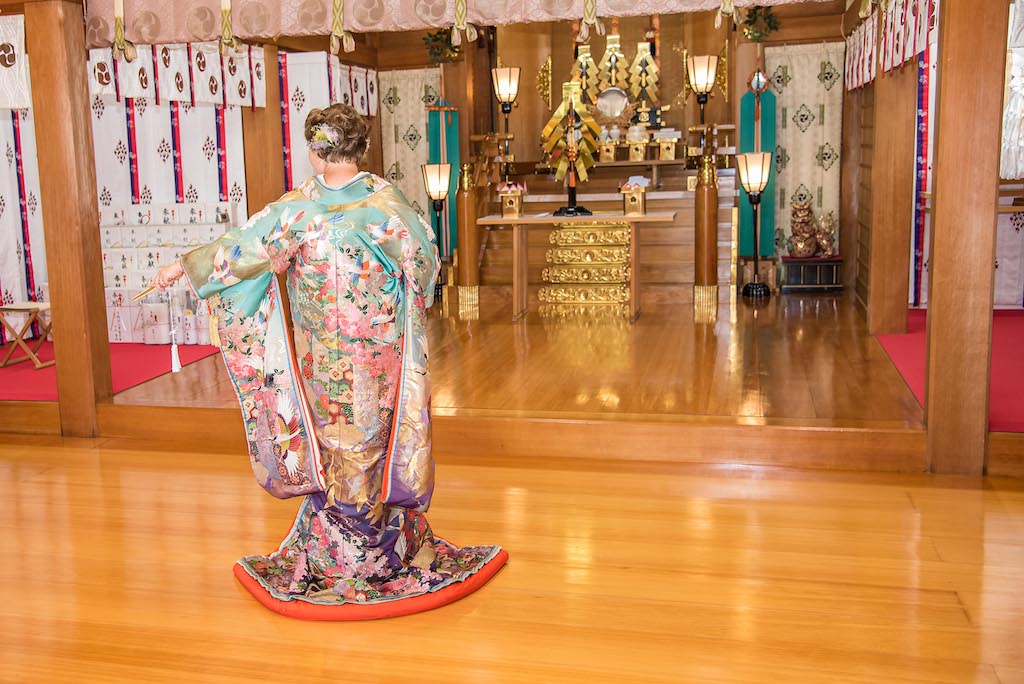 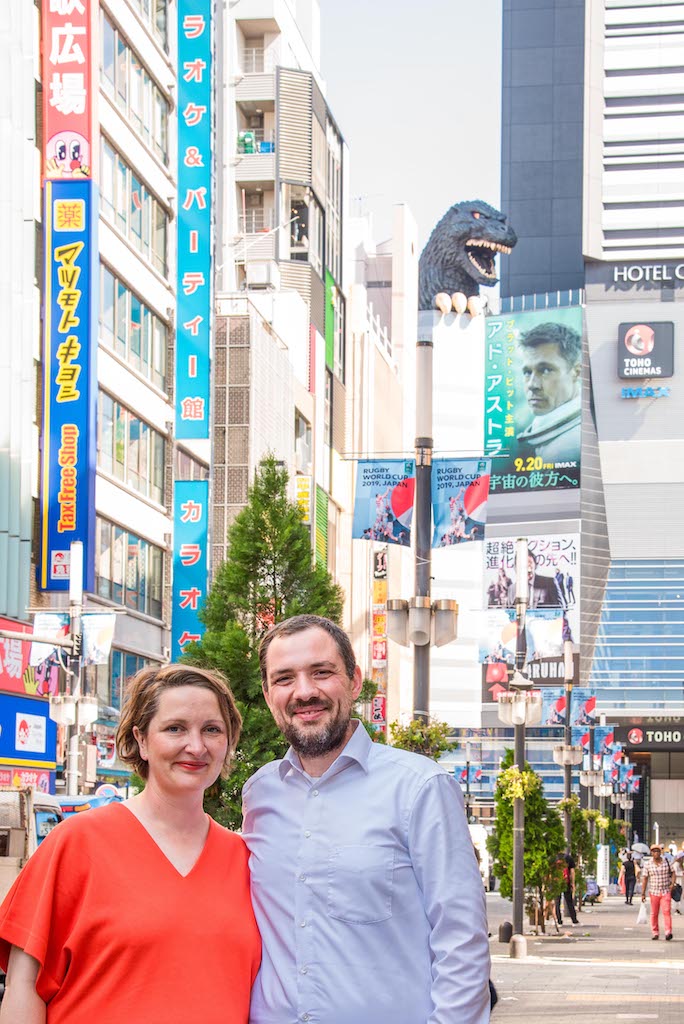 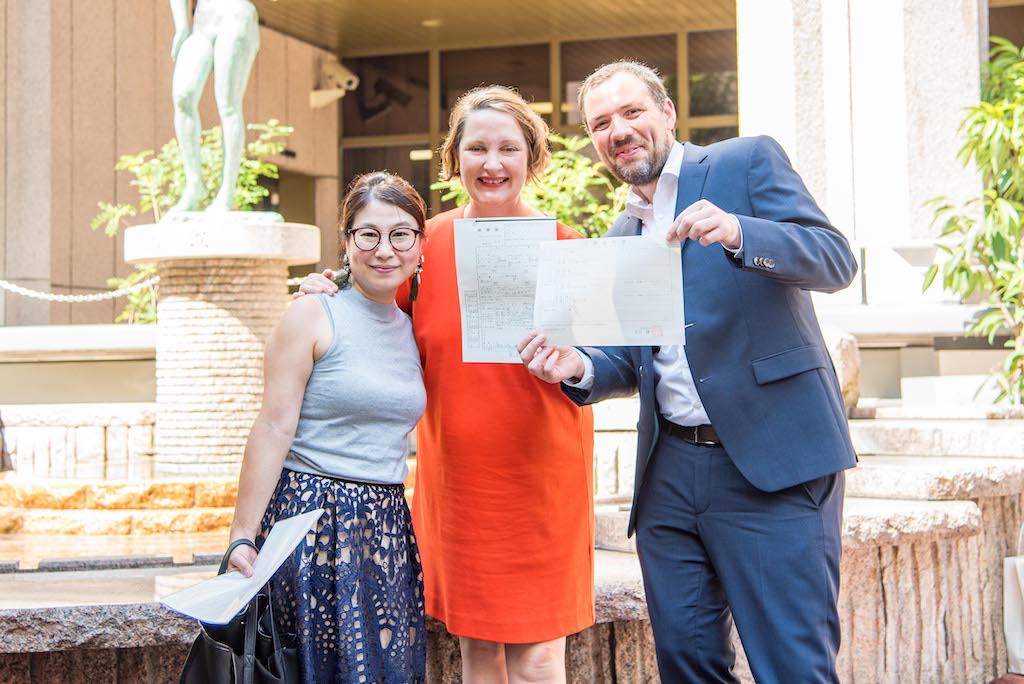 We are happy to announce that just before Christmas the bride and groom welcomed a beautiful, healthy baby daughter into the world.  We are sure you will join us in wishing them all the very best as they make new memories and face the future as a new, young, family.

While we are happy to help couples with legal applications, we can only accept them on a case-by-case basis.  We have no control over the outcome, which is purely at the mercy of embassy and city hall officials, as well as the accuracy of the presented documents.

Ready to start thinking about your Japanese Shrine Wedding elopement ceremony   If so, feel free to reach out to us today.  We would love to hear from you!