This couple knew they wanted an elopement ceremony in Nara and were immediately drawn to our Nara Garden package.  And why not?!  Yoshikien is absolutely stunning!  We made this plan in August last year, but until now had not been able to put it into practice.  So for this couple to trust us with an as yet unproven plan we are truly grateful.  Every business needs its early adopters, and these two proved just that.  Thanks guys!
So what is/was the plan?

Yoshikien Garden is a beautiful garden in a slightly-off-the-beaten-tourist-path part of Nara Park.  It is free for overseas visitors to enter and boasts a beautifully landscaped garden, villa and traditional teahouse.  Beautifully manicured throughout the year,  it boasts picturesque autumn foliage in October/November and artful use of moss in the spring.  We fell in love with it at first sight.
The plan calls for a ceremony in the Garden followed by a photo-shoot in Nara Park, courtesy of our Nara-based photographer of Kiki Photoworks.  It is always handy to have a local show you the ropes!
The couple came to Japan with two of their friends, who wouldn’t have missed this for the world, and wanted to have a simple ceremony in the garden.  The tea house in Yoshikien offers some seclusion from both the elements and prying eyes: perfect for this couple’s vision, and just what they wanted!

The weather was unseasonably warm, with clear blue skies and bright sunshine – always a good omen.
On the day Ayako and the hair and makeup artist met them at their hotel to help prepare for the ceremony.   Rather than donning kimonos they opted instead for traditional western attire.
The friends awaited the couple’s arrival who, contrary to western weddings, walked the aisle together.  It was a rather beautiful moment.
The ceremony space was tastefully, yet minimally decorated so as to not distract from the already picturesque environment of the teahouse and garden.   Being early spring, the flowers were in bloom and there was a gorgeous green canopy overhead and surrounding the garden.   Together with the quietness of the space it was a perfect location, one that we hope to use time and again, in all seasons.

Following a simple, yet beautiful, ceremony the photographer took over, taking them to various vantage points around the garden for some stunning shots.  Once they had had there fill of the garden, a rickshaw awaited the couple to transport them the traditional way around Nara Park, where they posed for even more beautiful photos.
I will let the photos speak for themselves: 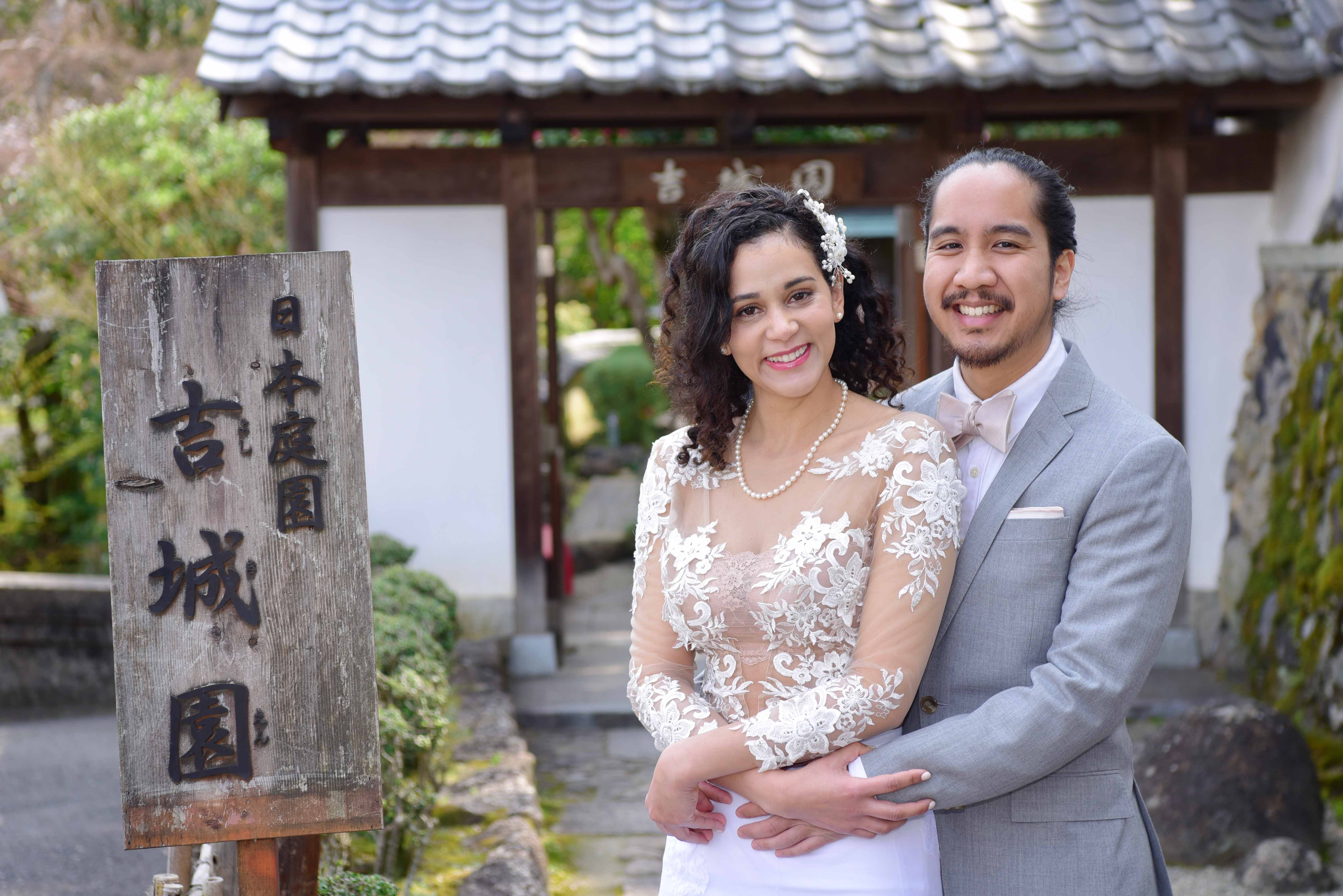 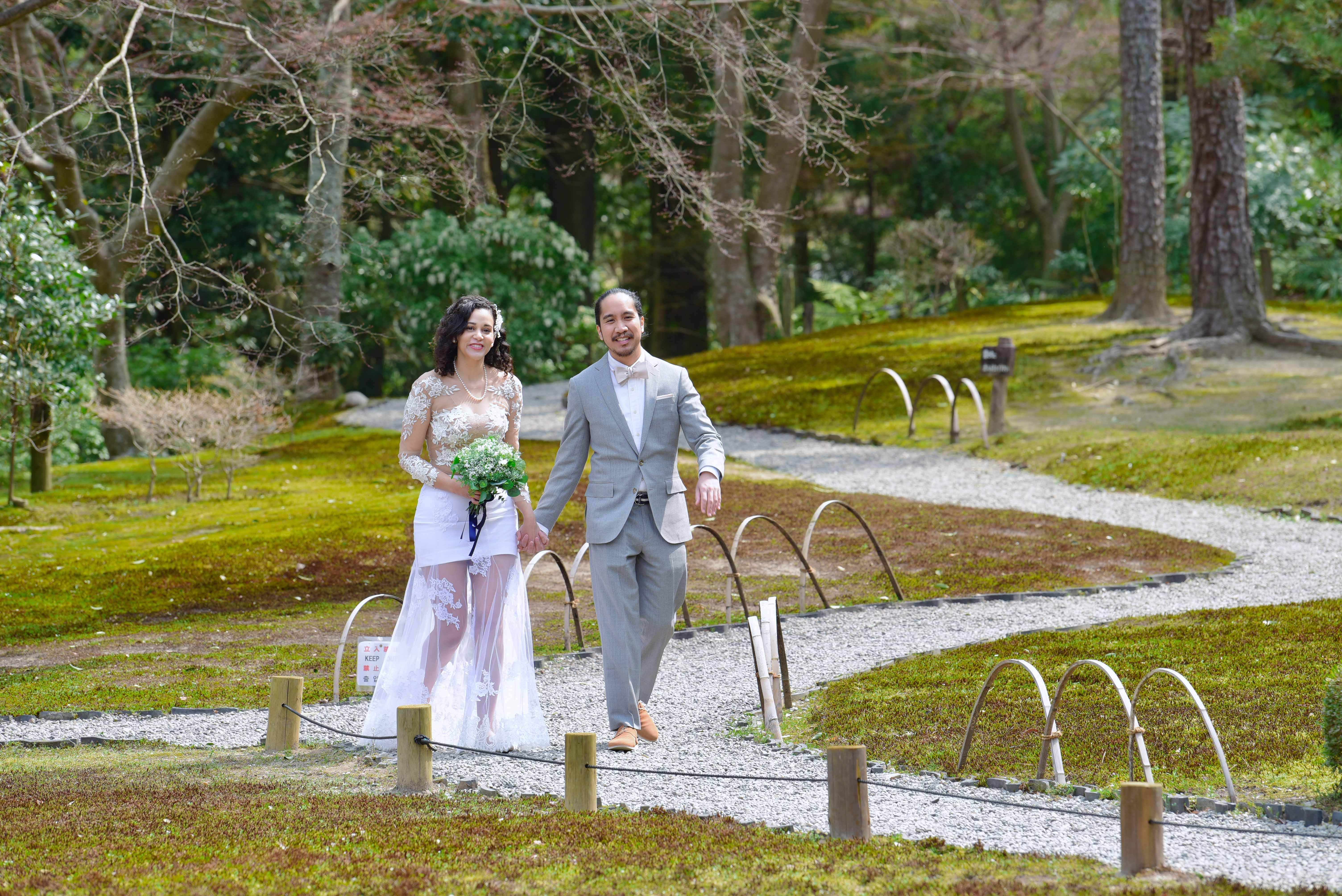 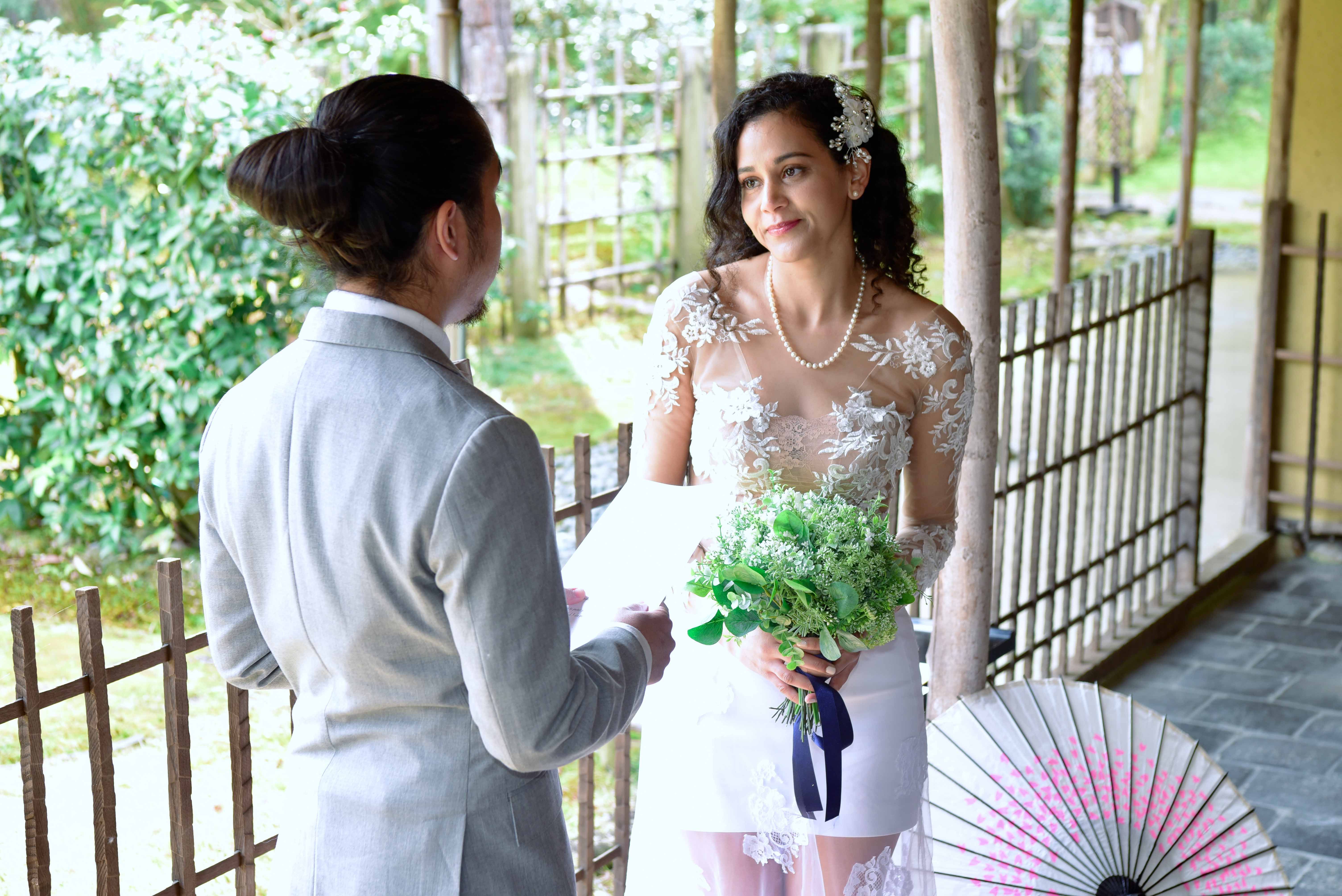 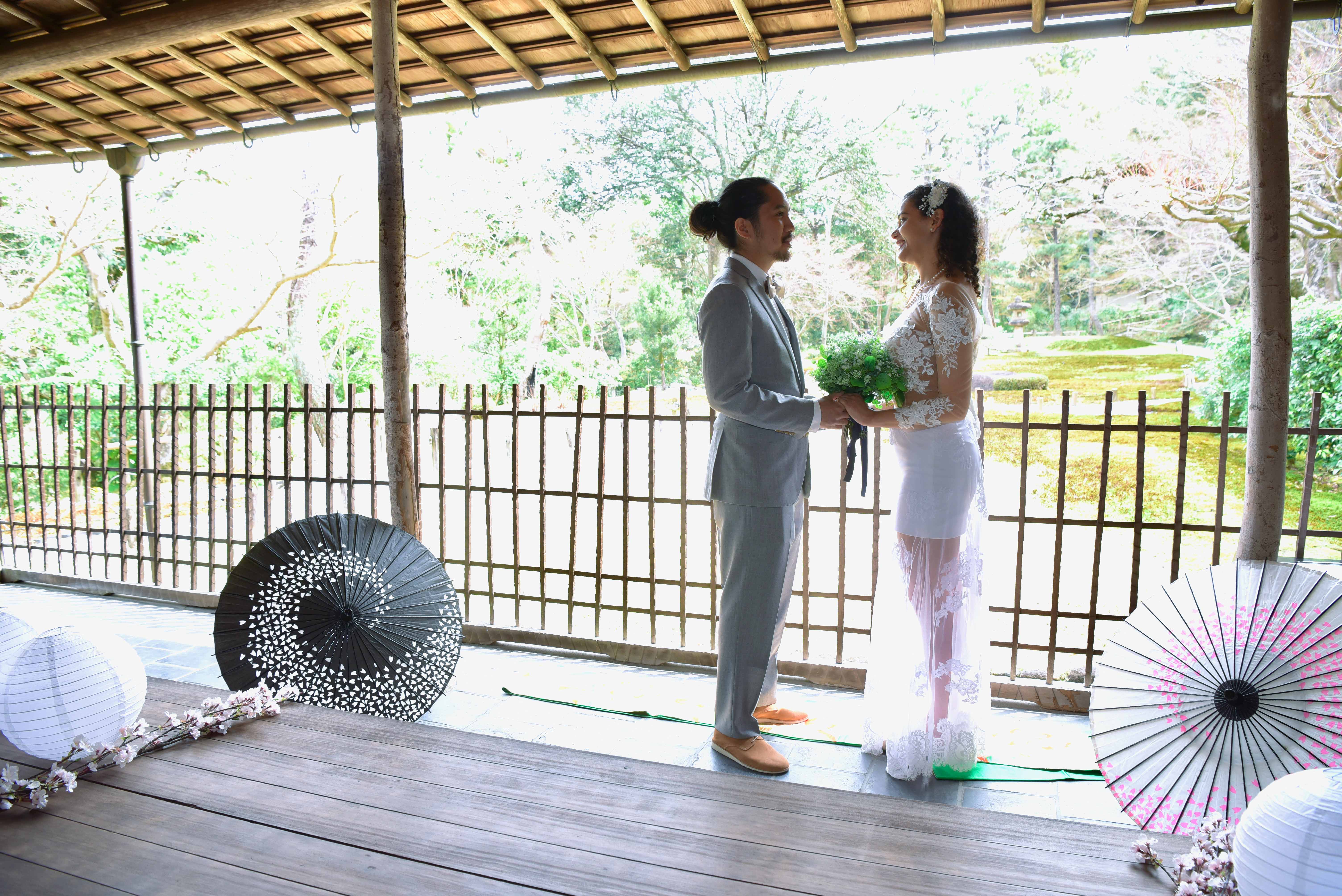 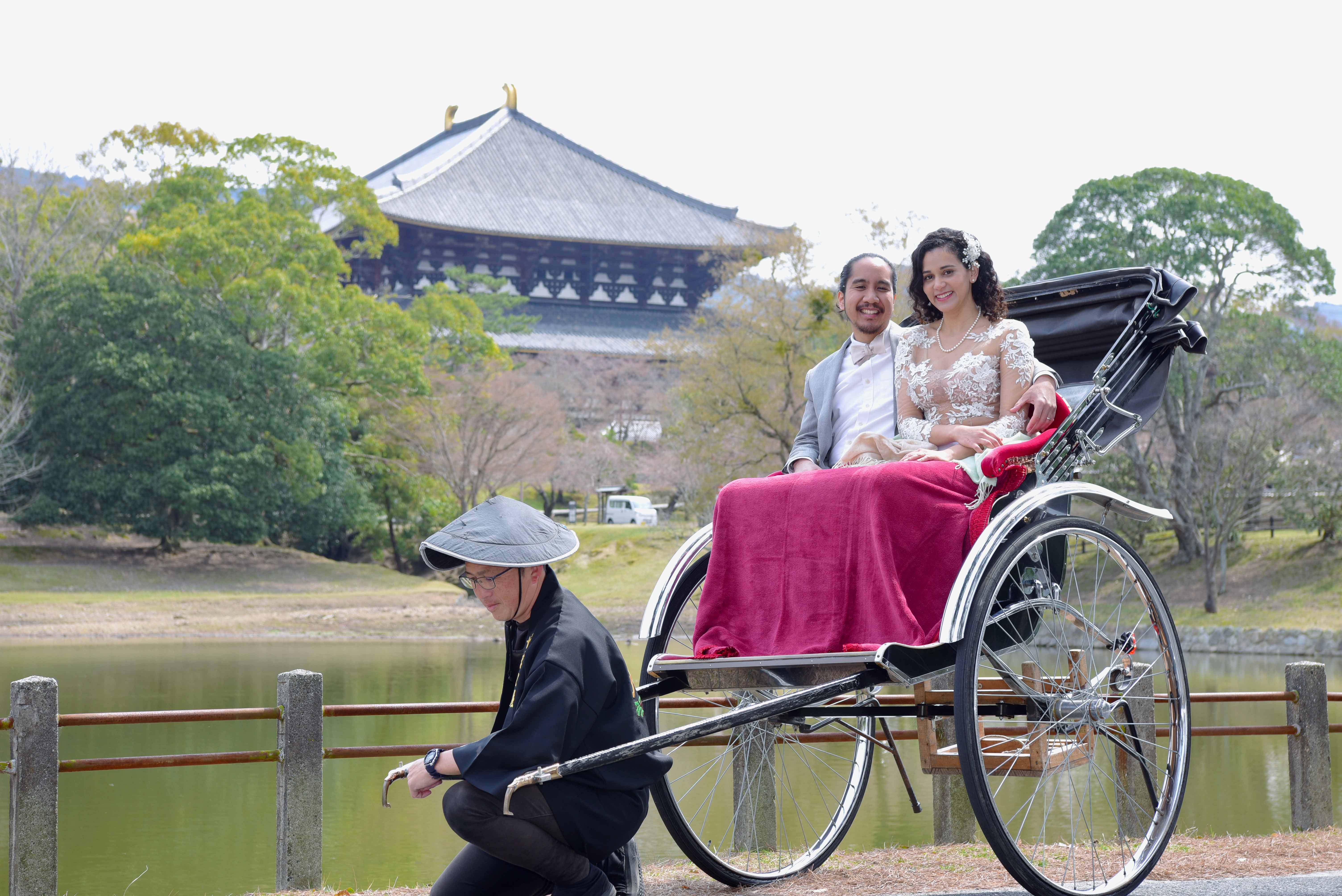 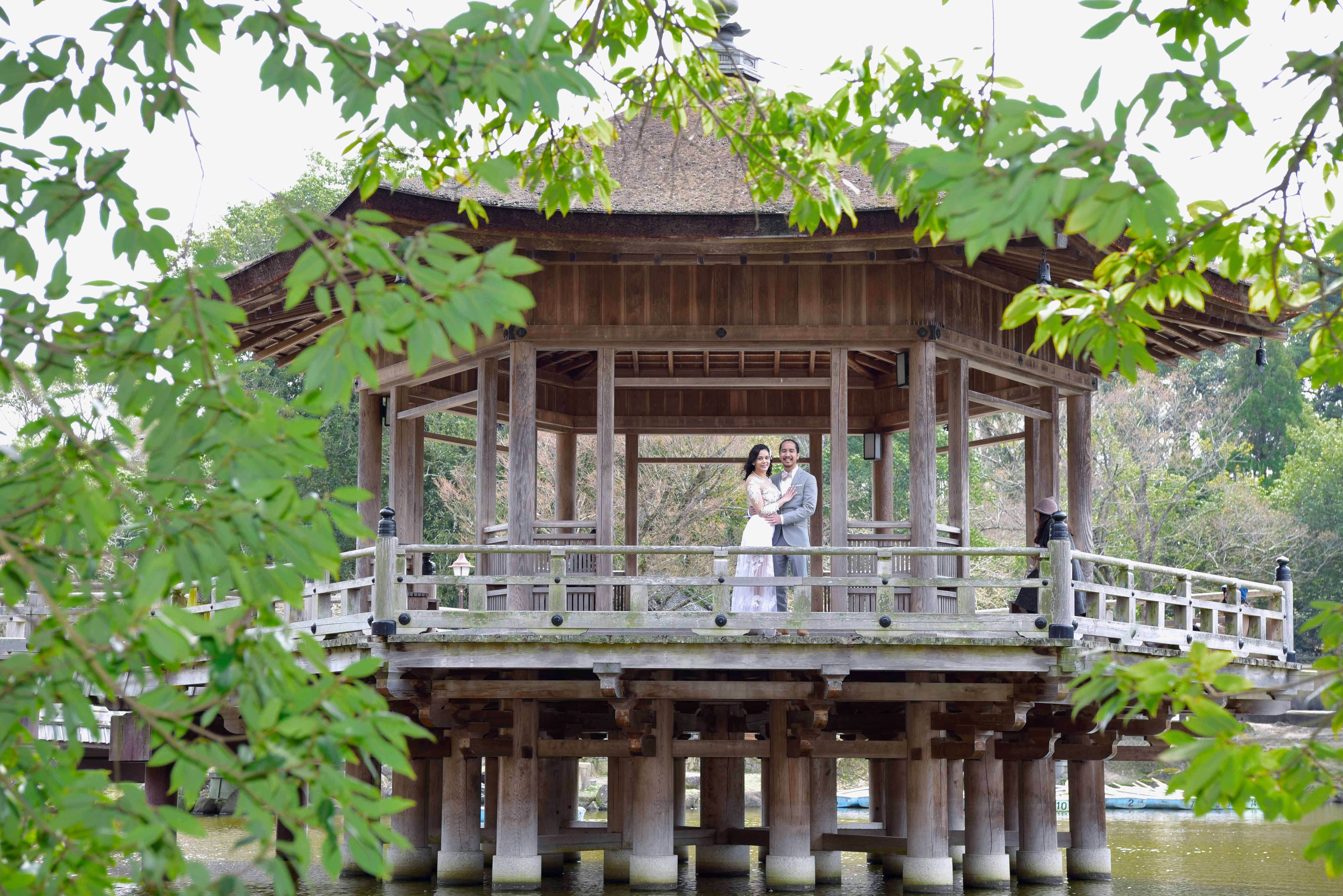 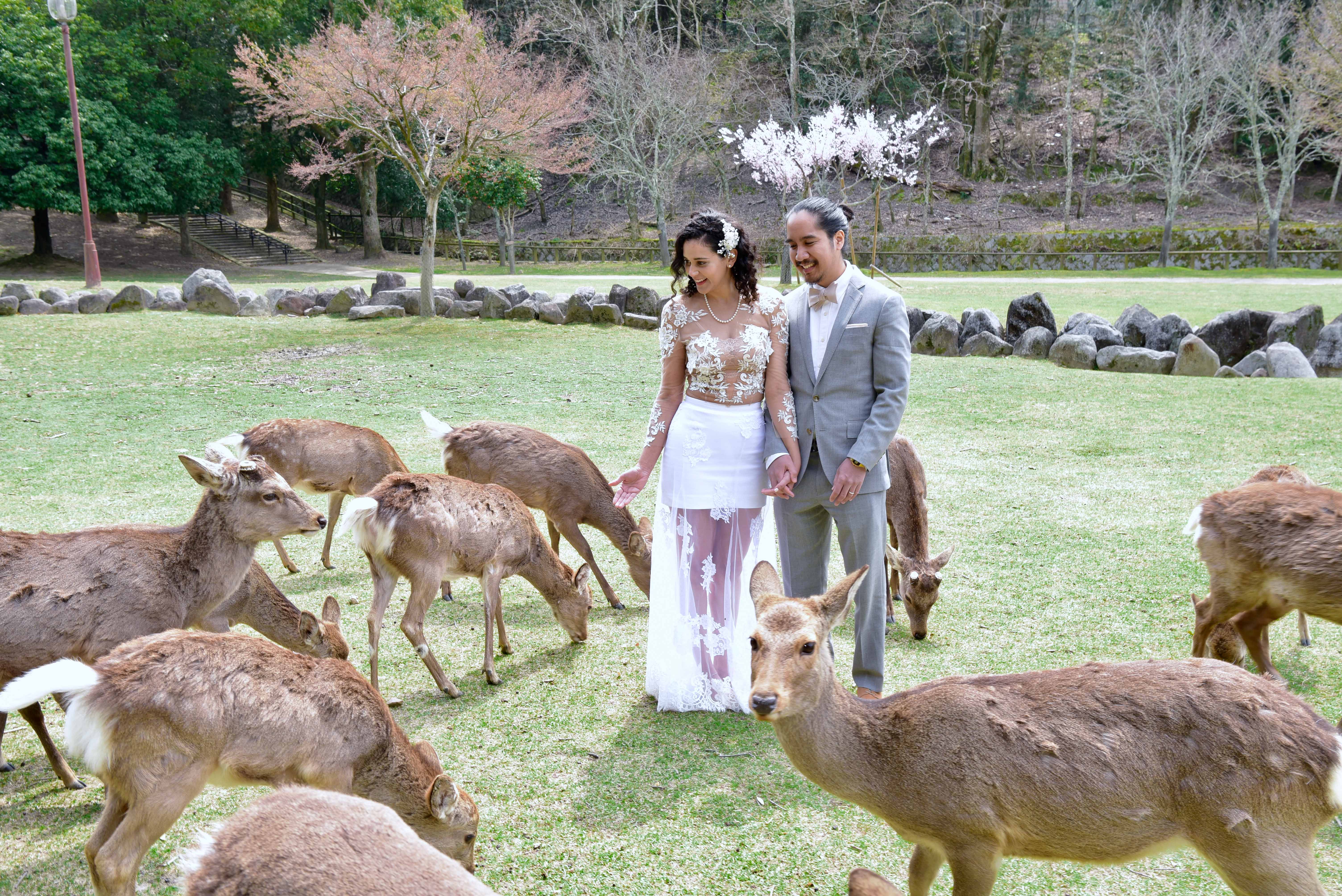 “We wanted a simple elopement ceremony in Japan, and Serendipity helped us achieved exactly what we dreamed. We had a small ceremony with just 2 guests at a tea house in a garden in Nara. the set up was beautiful and so delicate. The officiant’s words so meaningful and the entire experience delightful. Ross and Ayako took care of everything! and made it extremely easy to communicate despite being in different sides of the planet. They listened to our wants and ideas and gladly accommodated our requests. We met Ayako in person on the day if the ceremony, but were able to reach her or Ross if we needed anything prior to that day. Ayako was even more lovely in person and super helpful to work with. Our only regret was not having more time to spend with Ross and Ayako, they are such great, down to earth people.

I would highly recommend this company for elopement wedding needs.”

If you want to start planing your own elopement ceremony in Nara or anywhere else, contact us today to see how we can help.  We will be happy to hear from you!