You know when you fall in love with a place so much that you have to return again and again; a place that feels like a home from home?  That is how this couple feel with Hakuba.  They had been snowboarding there several times in the past, and knew that they had to get married there.  And why not?!  Hakuba is an absolutely stunning place in winter, with snow-capped mountains and the snow-covered trees; the powder snow and the white covered roads and narrow lanes.  It is incredibly romantic; it is a veritable paradise: quiet, slow, and picturesque.
Such a popular place for Australians and New Zealanders, as well as people from further a field, that during the winter months, the population of this small town almost quadruples!  This year was no different.  And it proved the perfect setting for our couple from Australia, Natasha and Jonas.

Destination Wedding in Hakuba: The Beginning

They had actually started planning with a different venue before they found us, but they were experiencing two problems.  One, problem was the language and the other was guest capacity!  The bride and groom are so loved that practically every invite they sent out was returned with a “yes, definitely”!  It’s such a great testament to this wonderful couple that as many as 115 people made the long trip from Australia to Hakuba to be at their wedding!  The wedding was going to be bigger than either of them had envisaged.  This is when they contacted us.
We contacted the first venue on their behalf and it quickly became apparent that the couple’s guest list had outgrown the it!  And so the search was on for a new one.  We had never been to Hakuba before and so were eager to explore a new place and build new relationships.  So we hopped on a train and made the long trip to this winter wonderland – a place that Ayako and I quickly came to love. 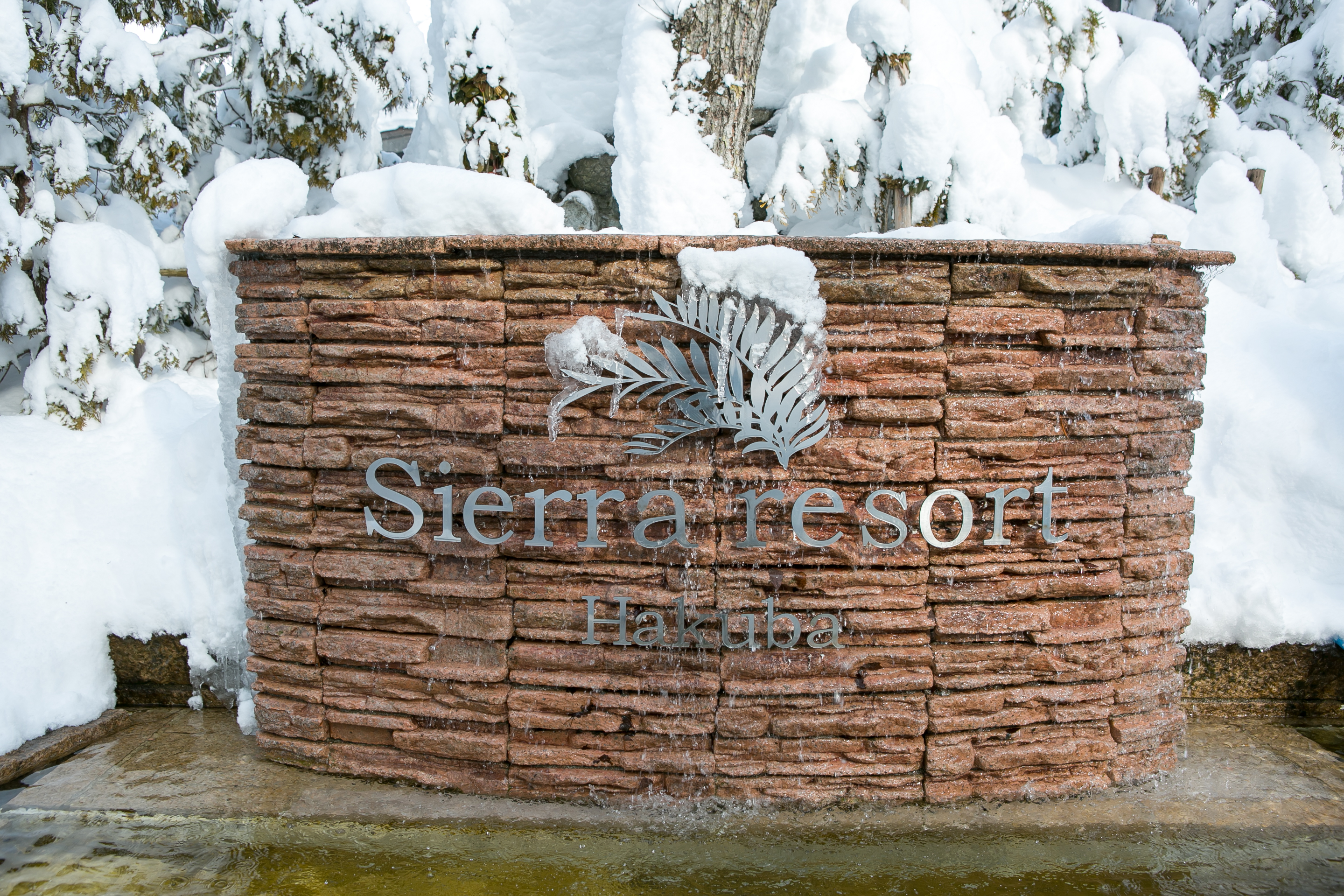 The venue we settled on was Sierra Resort, a gorgeous resort hotel set in the side of a mountain, surrounded by picturesque forests and with stunning views of the peaks.  It has a lovely homey feel, which Ayako and I instantly fell in love with.  The hotel was full-to-brimming with warm hospitality: free hot snacks and drinks including sake for guests; hot springs; a guest lounge and even an igloo in the garden, in which you could enjoy yet more hot snacks and beverages.  On top of all that, they have their own chapel and reception room capable of supporting the numbers we needed!  Another exciting discovery with Sierra Resort is that the Chef is something of a local celebrity, having won numerous awards and accolades from his industry peers.

We passed on all this information to the couple, together with photos and videos, and despite not seeing the venue in person, it was an easy choice to make!  The couple was excited, the staff were excited, and we were excited!
Fast forward one year to January 2019…

Global climate change is unfortunately a thing that we have to contend with these days, regardless of the season or place.  In the weeks leading up to the wedding we were aware that there was no snowfall in Hakuba yet.  It usually starts snowing in early to mid December, but by the mid January it still hadn’t arrived… While the wedding would still have gone ahead without snow, we really needed it to complete the winter wedding feel we had all envisaged.  Furthermore, the guests needed the snow so they could all enjoy snowboarding or skiing on the days either side of the wedding!
The ski resorts and hotels in Hakuba were all sweating on this… their businesses can only survive as long as there is snow!  Luckily, the weather gods were smiling on us.  On the very morning of Ayako’s and my arrival in Hakuba, just two days before the wedding, the snow came.  After leaving Tokyo at 5:30 am, we arrive at 9:45am in Hakuba, just as the  snow started falling.  Pretty much as soon as we got off the motorway (highway) it started snowing.  And as we got closer to Hakuba, the heavier and deeper the snow got.  It was beautiful – we were all like kids again!

I personally had never seen such fluffy, powdery and dry snow as this before.  Even my dogs loved it!  (Yes, we didn’t leave them at home or in a hotel by themselves.  They accompanied us for this trip!)  And it didn’t stop snowing!  It continued to snow right up to the time of the ceremony, on the 22nd January, by which time it was over three feet deep in places.  In fact, it was so deep that it took a good hour to dig the car out of the snow on wedding day! 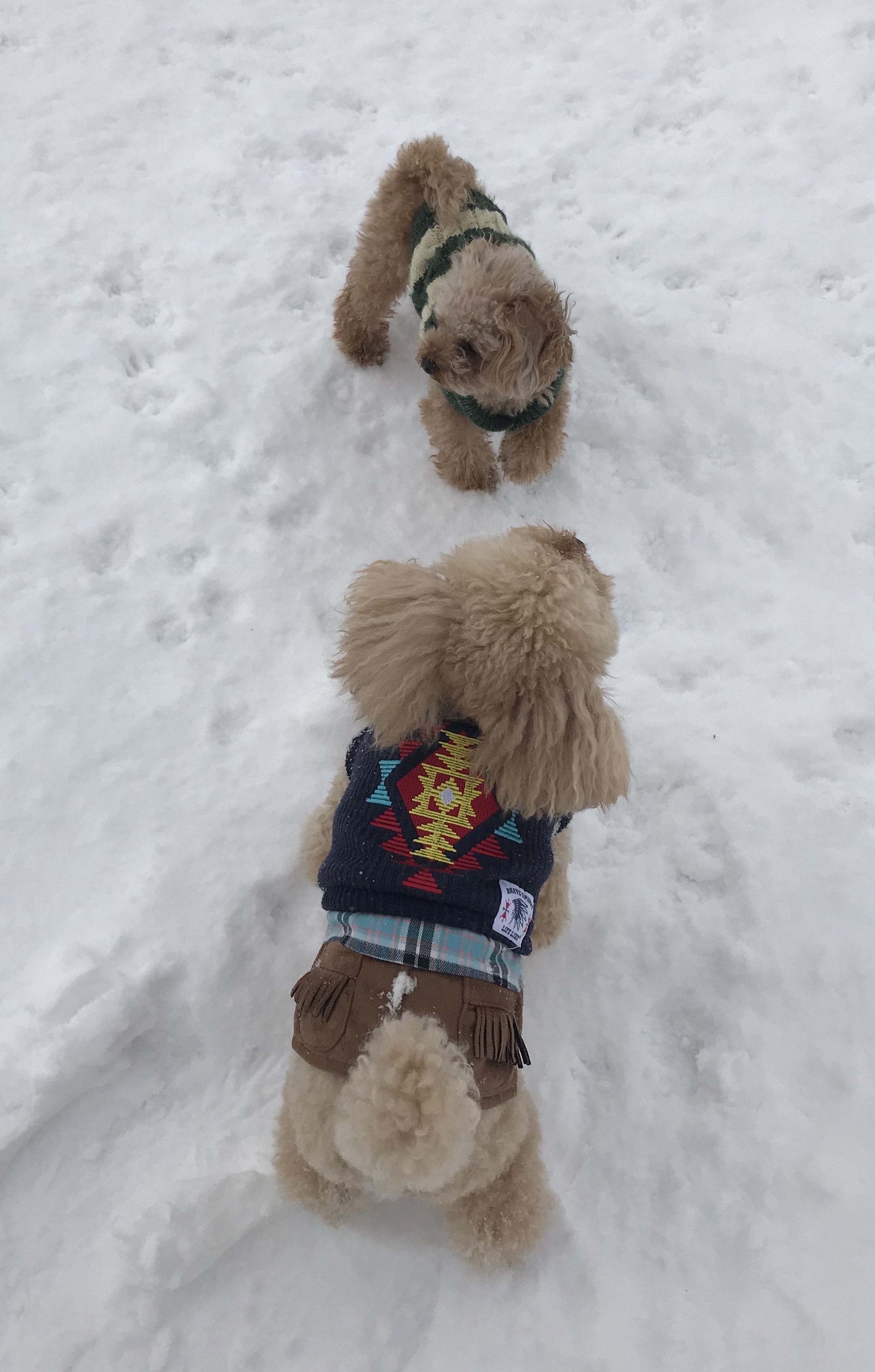 The chapel itself is beautiful, and didn’t need much in the way of decor.  There was a large window behind the altar, from which the beautiful snow scenery could be viewed, perfect for the winter, snow wedding the couple has envisaged.  The bride wanted a candle-lit aisle, with rose petals scattered along the runway, for which we mixed real and LED candles creating a pleasing warm feeling in the otherwise cold setting.
It looked perfect! 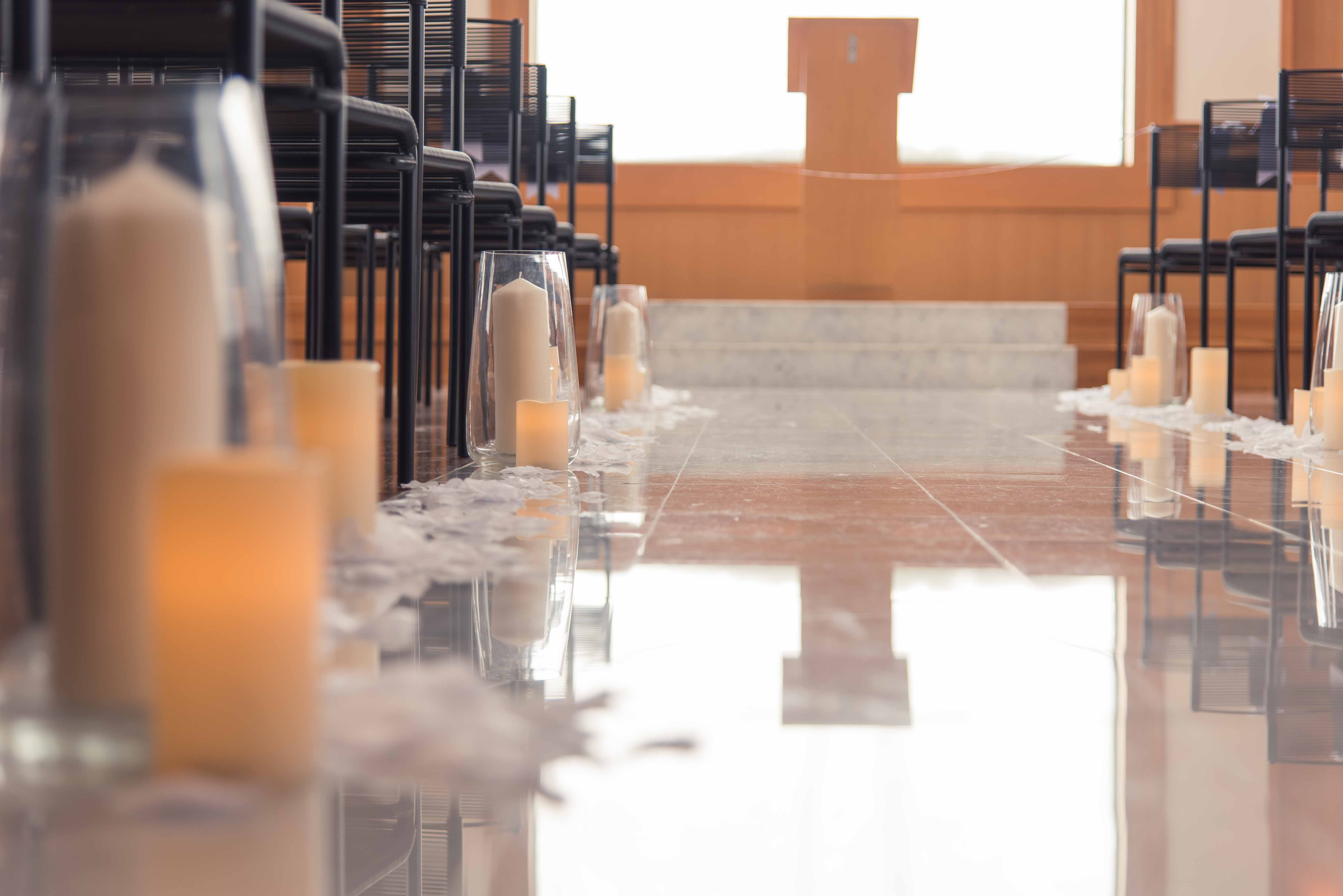 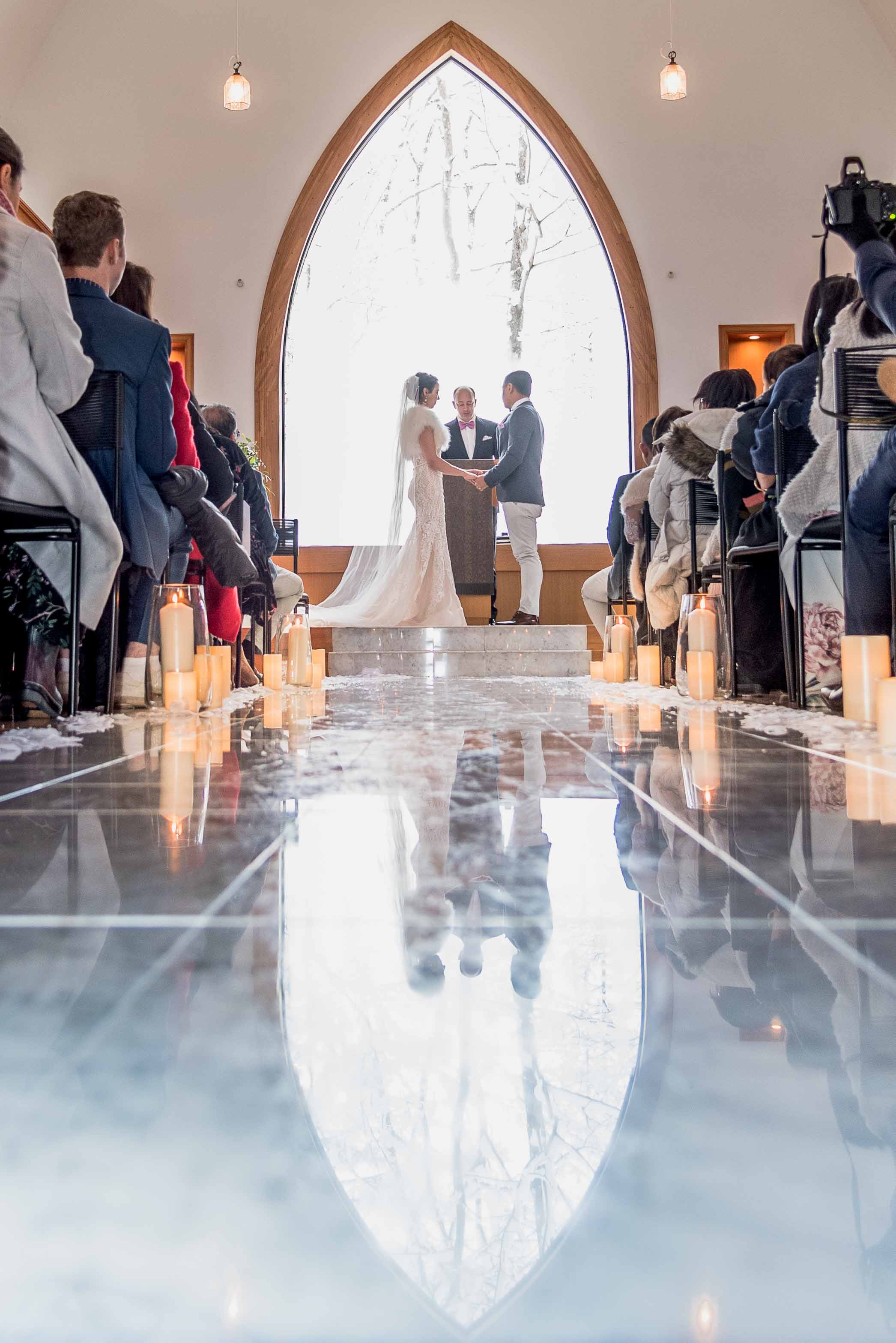 Natasha, the bride, was the most relaxed bride we have ever worked with.  Nothing seemed to stress her out.  Which is good!  The only people allowed to stress on wedding day are the planners.  The bride just savoured every minute of the day, as should all brides!  The groom, Jonas, admitted to nerves, making several pre-ceremony trips to the john’s but otherwise he too, once the ceremony had started was a cool cucumber!
The bride wore a white wedding dress, accompanied by her bridesmaids, all sporting pink, adding a splash of color to the white winter landscape.  The groom and grooms men wore matching blue/grey blazers, all tailor-made by a friend of the groom.  A friend also gifted the groomsmen with cool ninja stars for their lapels! 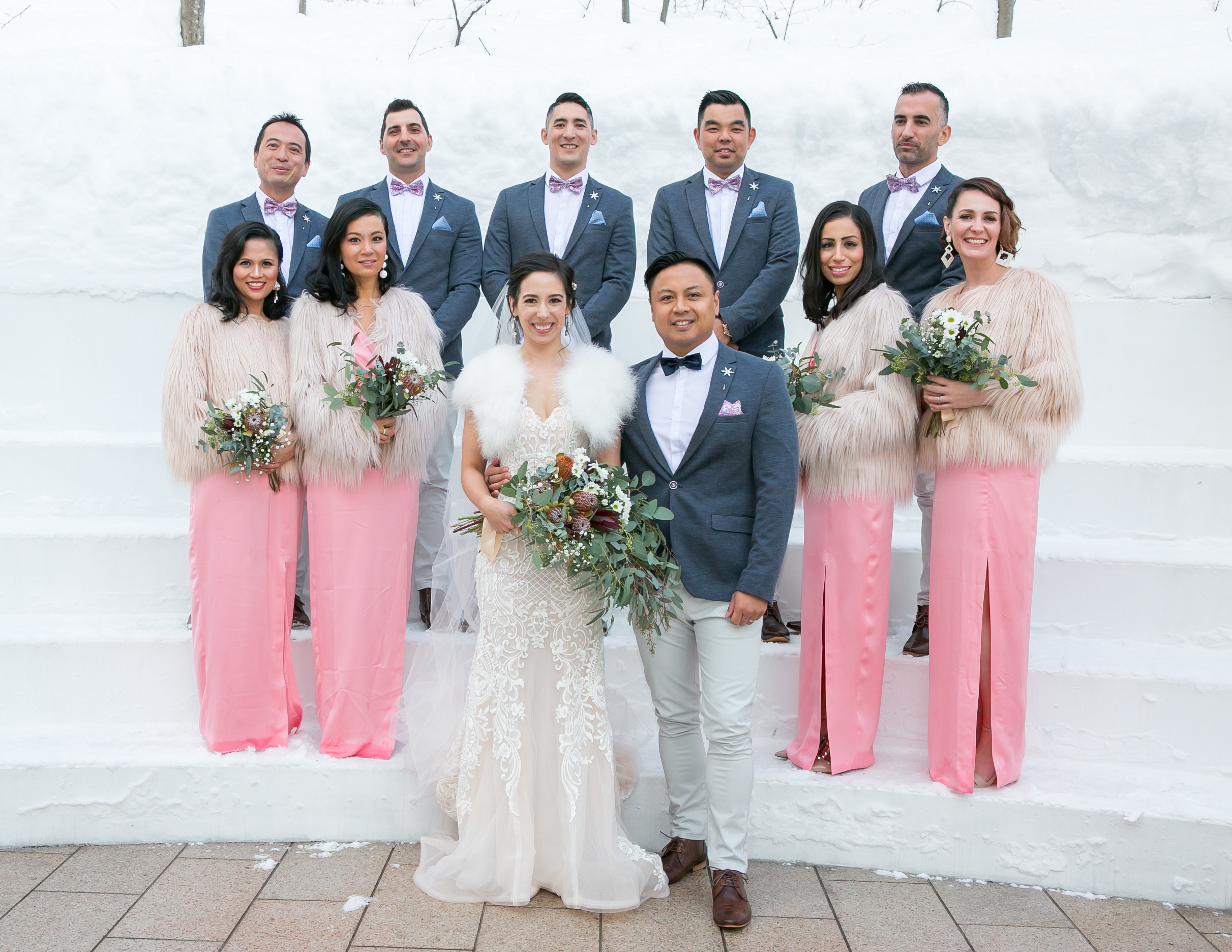 While there was nothing inherently Japanese about the wedding, however there was a subtle ninja theme running through the day, hence the ninja stars for the grooms men.  The couple gifted each guest with, among other things a ninja Lego man, which was placed at each table place, and again, looked really cool! 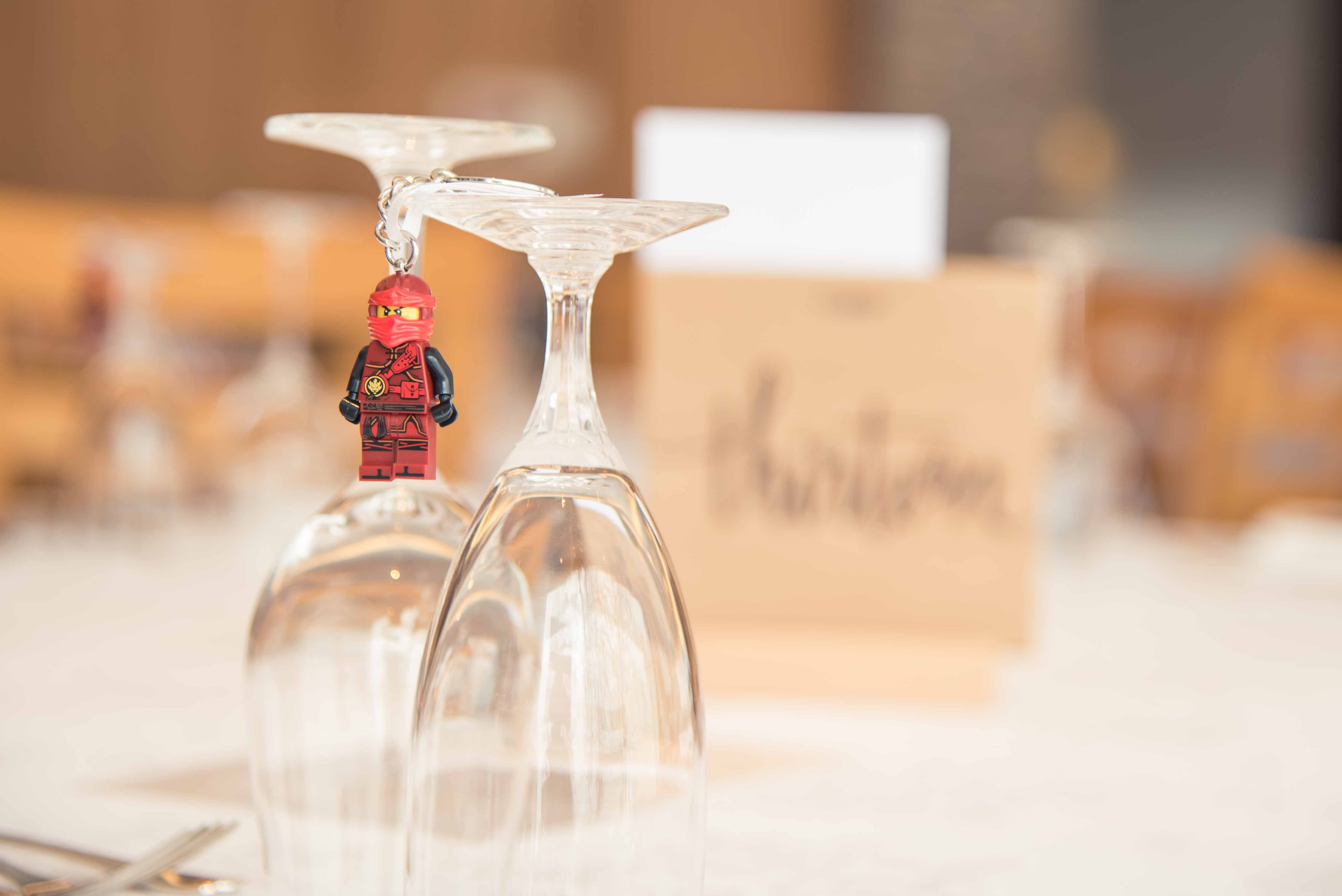 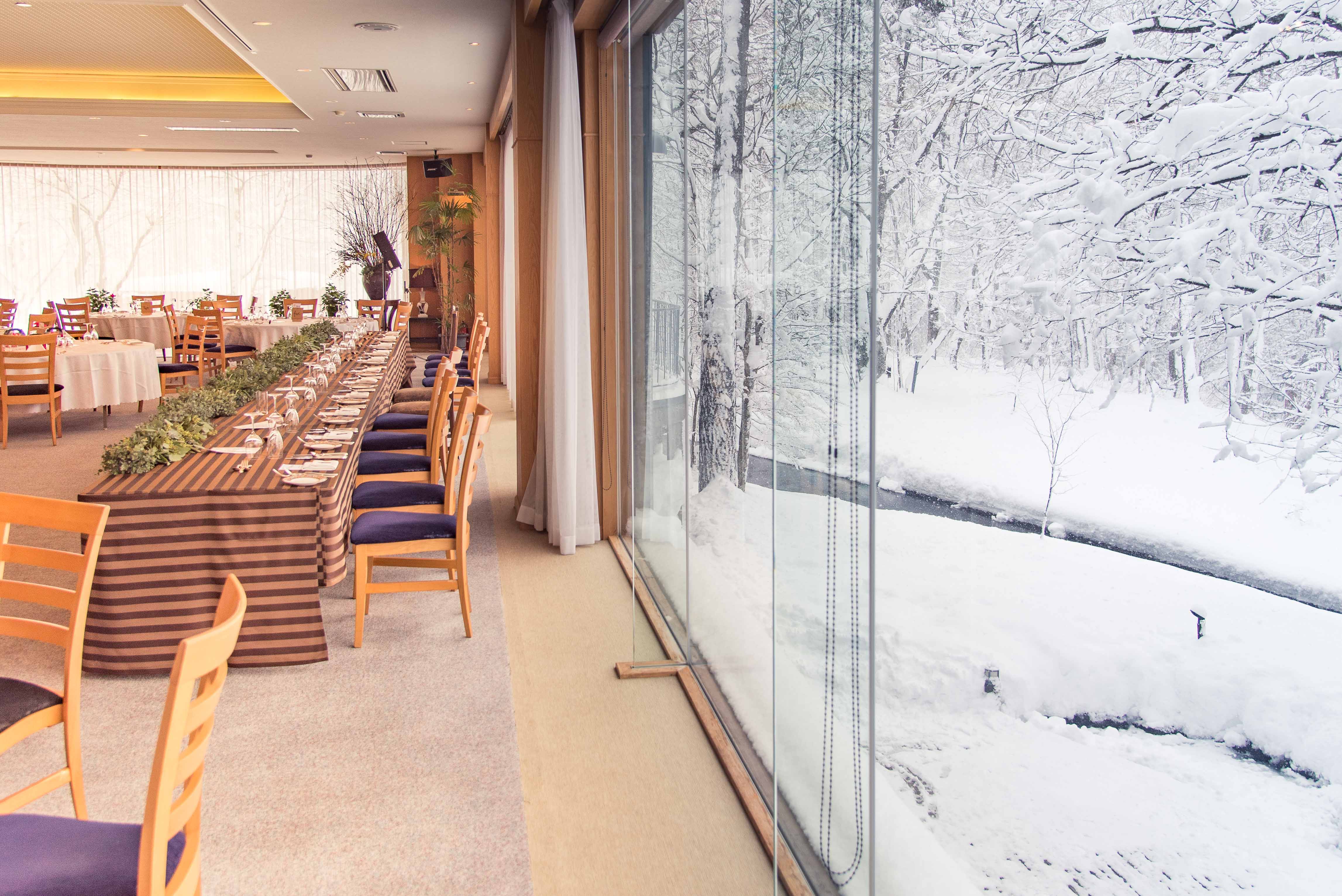 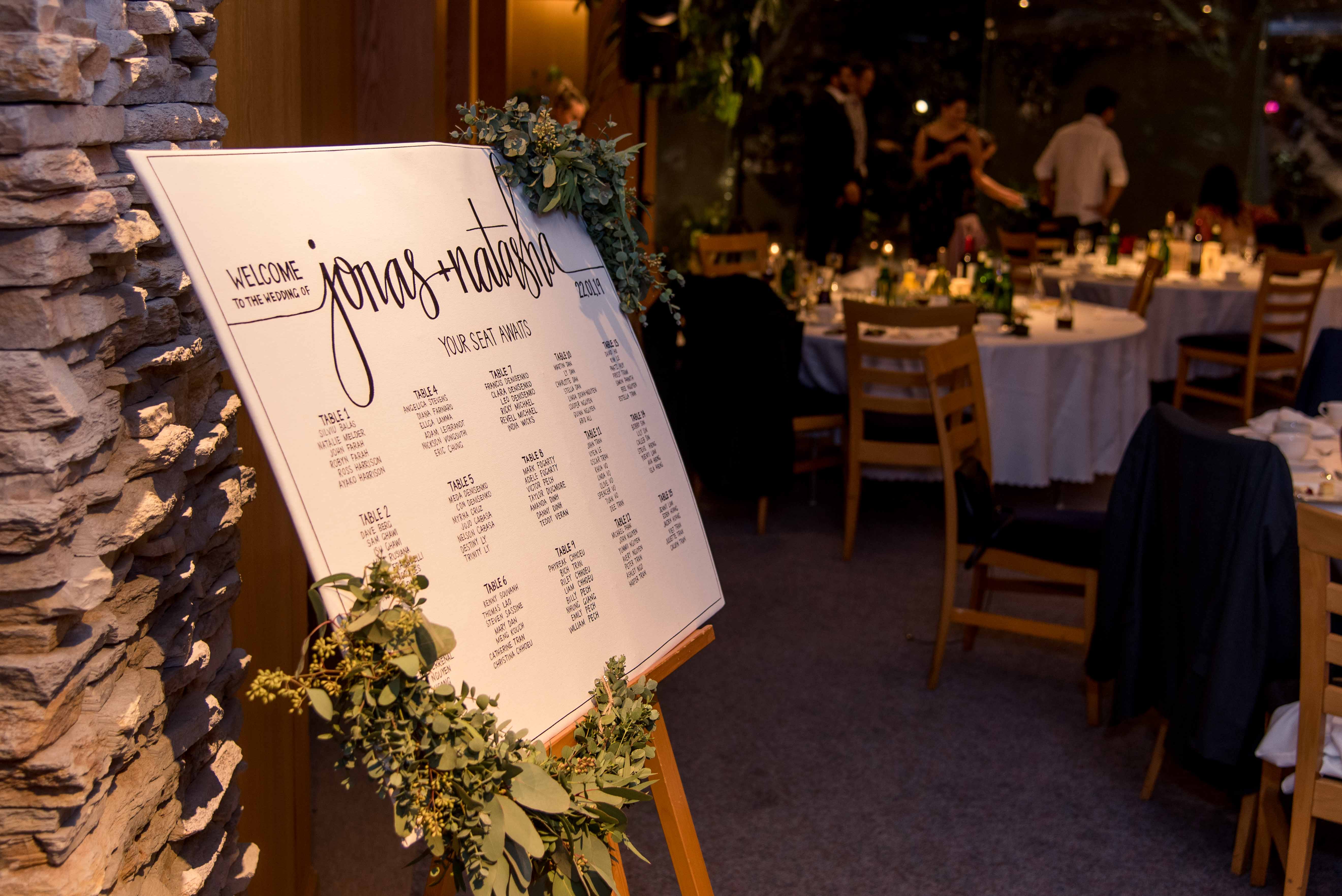 While it was minus three degree outside during the day, falling to minus 13 by the end of the evening, it was nice and warm inside.  It was a very happy day.  No one was stressed, as can often be the case at weddings, especially ones this big in Japan.  Even the hotel staff and management enjoyed the wedding.  This was a stark contrast from the stress of the weather beforehand and the no small concern of so many guests.   There were smiles and laughter from all sides.
As a member of the planning team I may be biased, but this wedding was perfect!! 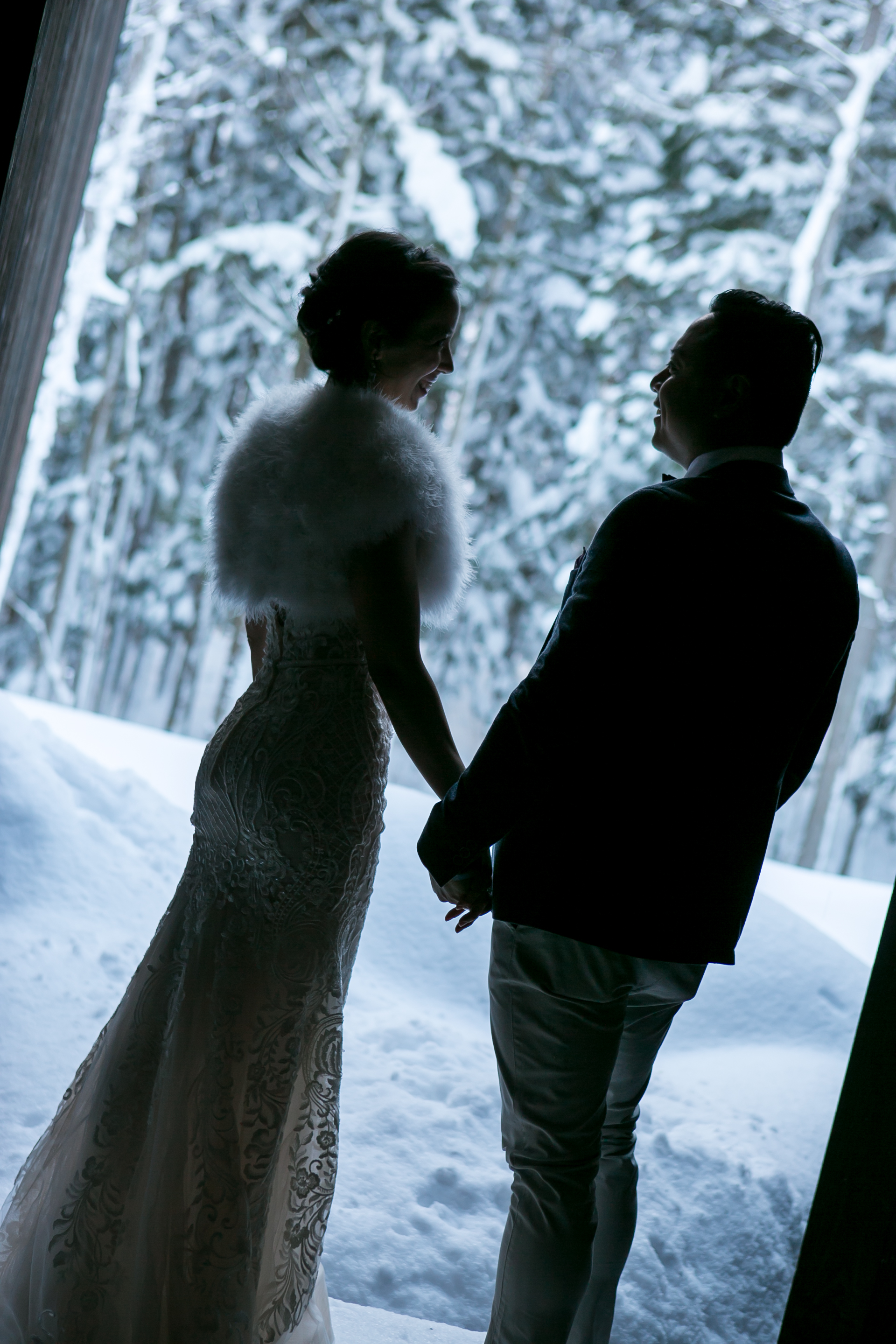 For their part, the couple were great to work with!  From the start they were aware of potential cultural differences between organizing a wedding in Japan and Australia.  Even when the first venue fell through, due to the number of expected guests, they never panicked.  This was the first time we had organized a complete wedding and reception at a venue that neither the bride nor groom had ever laid eyes on.  And it was the biggest wedding we have done to date.  Despite this,  they trusted us entirely.  And for that we offer our sincerest thanks and appreciation to the couple.

Summary:  A year of planning for a wedding at a venue neither the bride nor groom had ever laid eyes on, was an unprecedented success and, more importantly, was the beginning of a lifelong friendship –  we love you guys!

What did the Couple Say?

“My husband and I thought we would have a smiple, small wedding in Hakuba with a few friends and family. To our surprise, over 100 guests RSVP’d and our venue could no longer accommodate us.

At this point we found Ross and Ayako. We had completely under estimated the work involved in planning an overseas wedding. Ross and Ayako explained the cultural differences between a wedding in Australia v Japan, they set expectations so that there were no surprises, they found us a new venue, helped us plan before and after wedding events for our guests and were in constant communication with us during the whole process.

Our wedding went off without a hitch and we had the most amazing day. If there were any problems on the day, we had no idea because Ross and Ayako handled absolutely everything.

Aside from saying YES to my husband, hiring Ross and Ayako was the best decision we made in this whole process. We definitely would not have been able to pull off such a fantastic day without them!”

Want to see about your very own Hakuba winter wedding?  Contact us for more information!